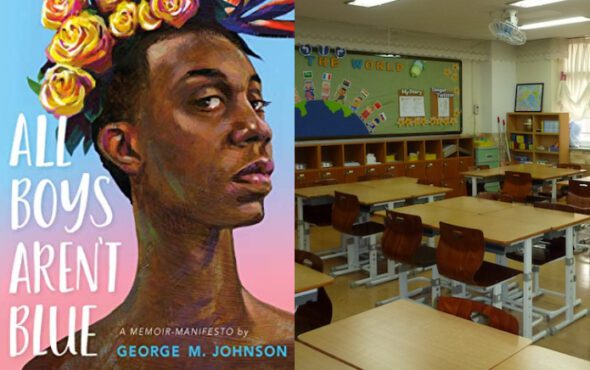 A white Florida school board member has filed a criminal complaint about the inclusion of George M Johnson’s Black queer memoir, All Boys Aren’t Blue.

According to a report from The Palm Coast Observer, Jill Woolbright filed a formal complaint with the local sheriff office over the book’s content.

Woolbright, who is a member of the Flager County School Board, claimed that the presence of the memoir breached the state’s obscenity laws.

Before taking her claim to the authorities, Woolbright reportedly met with the superintendent Cathy Mittelstadt and school board attorney Kristy Gavin.

But after her complaints weren’t relayed to other members of the school board, she filed the paperwork and submitted the book as evidence.

“My concern is for the children of Flagler County. This book needs to be investigated as a crime in our media center,” she said.

“This is pretty heavy stuff, violating our own policies. That’s why I felt the need to file the report, so I know it will be investigated.”

The memoir was available in four schools within the district – with one school reportedly pulling it from campus before the documents were filed.

Colleen Conklin, who serves alongside Woolbright on the school board, opened up about the complaint and called it  “disingenuous.”

“All she had to do was send an email to Cathy thanking her for the meeting time and the discussion and looking forward to the outcome of her investigation and cc’d the board members,” she told Flagler Live.

“If she was so worried about the board members knowing, that’s a very simple thing she could have done.”

All Boys Aren’t Blue wasn’t the only book that was targeted in Woolbright’s filing, other titles included The Hate You Give, Speak and Stamped: Racism, Antiracism and You.

In an interview with MSNBC, Johnson opened up about the complaint and called it a “destruction of freedom of speech.”

“It’s interesting because you have parents that are saying, ‘Well this book is obscene, this book shouldn’t be here and my child shouldn’t read it.’ At the same time thinking that their opinion about the book means that no other child has the right to read this book at all,” they explained.

When asked on Twitter how fans can help, Johnson wrote: “I’m still figuring it all out. I’m gonna be doing some interviews to fight against it especially for the other authors who are being intimidated by these folks.”

Woolbright’s complaint has also caught the attention of Gabrielle Union, who will be collaborating with Johnson on an upcoming series based on the memoir.

“What’s she gonna do when the TV show comes out? #StayMadJan You cannot stop the truth,” she wrote. “We will continue to find ways to tell the truth & shame the devil. 10 toes down. I stay ready to fight.”

The report is currently being reviewed by the Sheriff Offices Investigative Services Division.

A woman in Florida has filed the first criminal complaint against All Boys Aren’t Blue. She wants the Sheriffs office to investigate my book as a crime to be in high school libraries.https://t.co/3WT9s93ENa

🤔🤔🤔 what’s she gonna do when the TV show comes out??? #StayMadJan You cannot stop the truth. We will continue to find ways to tell the truth & shame the devil. 10 toes down. I stay Ready to fight 🤷🏾‍♀️ https://t.co/7DA07Q1Lab