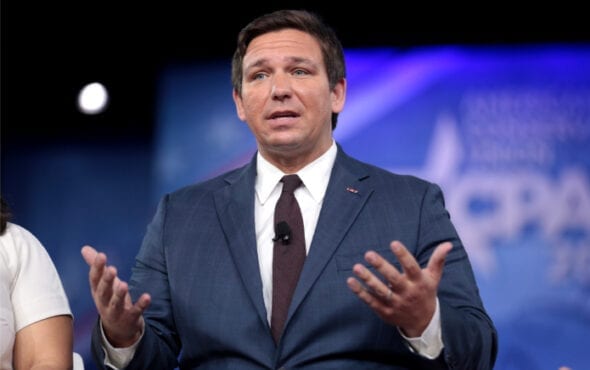 Florida governor Ron DeSantis has filed a formal complaint against a Miami restaurant and their drag brunch.

Over the last year and half, DeSantis has consistently targeted the LGBTQ+ community with harmful legislation.

During Pride Month in 2021, DeSantis banned transgender girls and women from competing in school sports.

His crusade against the LGBTQ+ community continued in March when he signed the archaic ‘Don’t Say Gay’ bill into law.

On 26 July, the conservative official filed a complaint with the Florida Department of Business and Professional Regulation (DBPR) against Miami’s R House restaurant and their staple drag brunch.

The filing stemmed from a viral video posted by the anti-LGBTQ+ Twitter account Libs of TikTok. In the clip, a drag queen is shown delivering a lip sync performance while being accompanied by a child.

“The video shows what appears to be a transgender dancer leading a young girl by the hand and walking through Respondent’s dining area,” the complaint said.

In case you aren’t aware.

This kind of law was what was used to justify regular raids on gay bars back then. And in turn they’re what triggered the Stonewall Inn riot when queer people decided they’d had enough of that bullshit.

DeSantis wants to bring those laws back. https://t.co/4ebxNFPeDs

“The dancers buttocks were fully exposed, and his ‘g-string’ style bikini bottom was stuffed with dollar bills.”

Due to the complaint, the DBPR investigated the establishment – which could potentially lead to R House’s liquor license being revoked.

On 27 July, DeSantis boasted about the anti-LGBTQ+ complaint during a news conference.

“They actually had agents going to this place and effectively just gathering information, getting intelligence, seeing what’s going on,” he said.

“And what they found was not only were there minors there – and these are sexually explicit drag shows – the bar had a children’s menu. And you think to yourself: ‘Give me a break, what’s going on?”

In response to the conservative governor, R House revealed that they were working on “rectifying the situation” via a statement to NBC News.

“We are an inclusive establishment and welcome all people to visit our restaurant,” the business said.

“We are hopeful that Gov. DeSantis, a vociferous supporter and champion of Florida’s hospitality industry and small businesses, will see this as what it is, a misunderstanding, and that the matter will be resolved positively and promptly.”