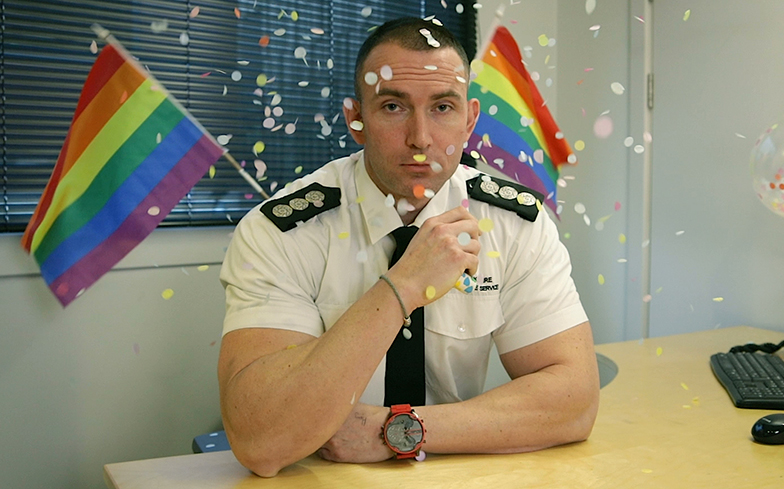 South Yorkshire Fire have responded to homophobic trolls with a brilliant video.

When the UK fire and rescue service added a rainbow flag to their profile picture last year to show support for the LGBTQ community, they received “a load of abuse” from people who didn’t approve of the small gesture.

“We don’t think homophobic abuse is acceptable and we stand with all those LGBT+ people we serve and imply,” they wrote on Twitter.

A “defiant” new video features the service’s employees reading out some of the abusive and homophobic comments made by people on Facebook when they changed their profile picture during Pride Month last June.

“Getting involved in the gay community is not correct,” reads one of the staff members, with another adding: “Constantly going on and on about who wants to shag who shouldn’t be a fire service priority.”

As the homophobic comments are read out, members of the fire service can be seen waving rainbow flags, wearing rainbow socks, and firing rainbow confetti in the humorous video, which carries the tagline: “Fires don’t discriminate, neither do we.”

Chief Fire Officer Alex Johnson said the service expects the video to get mixed reactions, but they couldn’t stand by and say nothing after the “awful and totally unacceptable” comments they received last year.

“We’ve produced it for two reasons – firstly we wanted to support the month and let our staff, and communities, know that we are proud to employ and serve them, regardless of those comments,” Alex said.

“And secondly we wanted to demonstrate that we are a genuinely inclusive organisation that values the contribution of all our staff, whatever their LGBT+ status.

“I’d encourage anyone considering a career in the fire service, especially those who may be inspired by our work around LGBT History Month, to register their interest on our website.”