Felipe Chavez is using his art to deconstruct perceptions around masculinity 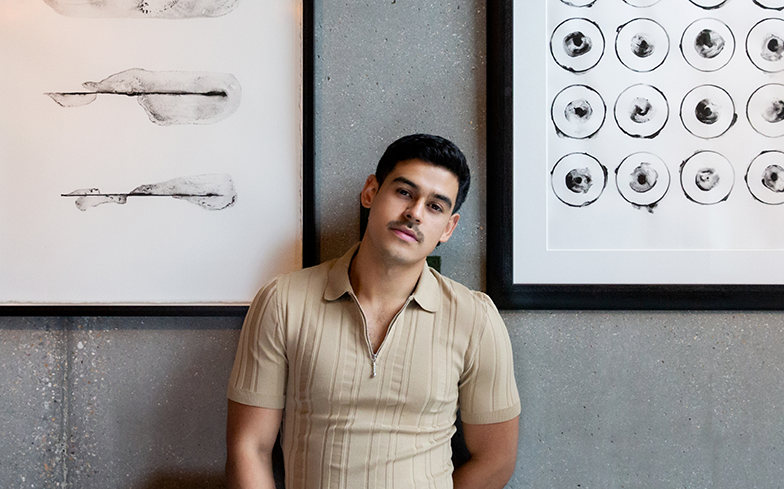 “I want the person looking at my works to feel like they’re allowed to explore their own body.”

Running from 3 September until 3 December at The Lighterman in King’s Cross, the exhibition consists of 17 paintings on Indian ink paper that combine Felipe’s “instinctive figurative interest in the human form” while offering a fresh take on masculinity.

“As a young boy discovering himself in a very religious country, I couldn’t take the risk to be seen weak or strange, so I embraced my artistic side and got involved in every aspects of art that I could get my hands on,” he admits of his upbringing.

“I want the person looking at my works to feel like they’re allowed to explore their own body and absorb the different textures and layers behind being a man, how it may feel sensual or very dark, but nevertheless beautiful.”

In celebration of The Hollow Man’s incredible reception, we caught up with Felipe to discuss how the project came to fruition, why deconstructing ideas of masculinity is an important theme in his work and how his queerness influences his art.

What inspired The Hollow Man?
I was approached in May by the owner of a group of restaurants, Barry Hirst, who had been searching for the opportunity to become more involved with the LGBTQ community. Not only was he helping by providing employment, but he wanted to utilise his establishment as an exhibition space for emerging artists who focused on the community, and were looking to showcase their most recent body of work. I consider myself to be a figurative artist at heart, feeling inspired by the male form and constantly exploring its many sides. At the start of the year I had begun creating a collection of work where I deconstructed the idea of what a man was and how it felt to be one, looking beyond the standard silhouette of a man. So when I was contacted by the restaurateur I was excited for the chance to explore this concept even further and exhibit it, especially coming from someone who was interested in queer art as much as I was.

How long did it take you to put this collection together?
In short, from the initial concept stage to finalising the collection, it took eight months. Having seen the space that I was given to display my works and the freedom by Barry, I was immediately inspired to develop the existing concept I had begun early in the year and push the boundaries further.

What elements of masculinity are you trying to challenge with this exhibition?
I wanted to give masculinity a face, to separate it from the human body and give it its own identity. So I began exploring the tangible elements of masculinity that I felt connected to, such as the darkness of my own armpit hair, how my muscles felt when I flexed them or the sweat and odour after running, and attempt to extract these feelings and visuals onto the paper. Through this, I was able to understand better what masculinity was to me and at times it was strength and dominance, but when I let myself loose and allowed the ink to morph on the paper, the pieces came out pure and gentle yet equally as powerful. So I want the person looking at my works to feel like they’re allowed to explore their own body and absorb the different textures and layers behind being a man, how it may feel sensual or very dark, but nevertheless beautiful. And that is also the beauty of this show – it’s an exploration.

How does your queerness influence your art?
My art is a display of how I see things, the way I look at my naked body or feel inspired by another man’s body as a gay man, is very different to the way a straight girl or man would do. And I would say it’s because there’s an element of relatability and physical understanding when the genders are the same. Because I am attracted to men, I’m naturally lustful toward the male form and I see no difference when I look at my own, and there is something very interesting about that, that I am sexually and emotionally drawn to a human with similar characteristics to me, so in my art I attempt to understand that.

How has your Colombian heritage influenced you as an artist?
I wouldn’t say there is a direct connection between coming from Colombia and my artworks, but the way I embrace my creativity and appreciate the world as an artist, has definitely been influenced by my Colombian upbringing. Having being raised by my grandmother in Colombia whilst my mother lived in the UK and my father passing away, I had a big role to play in my younger sister’s lives and there was no room for me to be dependent. As a young boy discovering himself in a very religious country, realising he was sexually different to the rest of his friends, I couldn’t take the risk to be seen weak or strange, so I embraced my artistic side and got involved in every aspects of art that I could get my hands on. This might have mainly been to cover up how I was secretly meeting strangers and trying to brush all to one side. So yes, this double persona in a country that didn’t accept me took a toll on me and I see the melancholic effect it conjures in my artworks.

What kind of response have you had from people about The Hollow Man?
Firstly, I am so grateful for the support I’ve received, both creatively and logistically from the restaurant team and my husband dealing with my creative stress. The public have really gotten themselves interested in this medium, I mean, not many people know what India ink is. I can see they’ve been impressed not only by the unique aesthetic I have, but the level of professionalism I brought to the show, how serious and passionate I am for my craft. Of course, a few sales are always a good sign but most importantly, I’m happy to see people get up close and see the beautiful textures left by the ink separating and to question themselves what the hollow man is.

Have you got plans for another project?
I’ve recently started working with a gallery in Miami called Robert Fontaine Gallery, a place that’ve sincerely been ‘stalking’ for the past few years, so I’m very excited to work together in some projects in the new year.
For the time being I have a group exhibition coming up as part of an art competition that I’ve been shortlisted for on the 20th of November at the Old Truman Brewery where, without getting too deep into philosophy, it’s the idea of everything around your body being transient and your name as a separate entity stays the same. You can also find a very special painting of mine called ‘BOY’ which is a very figurative nude self-portrait, exhibiting alongside a dealer called Henry Miller at Coningsby Gallery opening on the December 9 in Tottenham Court Road. This show is truly a fantastic modern and contemporary showcase of male nudes – which I’m sure all my fellow gays will appreciate.

The Hollow Man runs until 3 December at The Lighterman in King’s Cross.