THE FEB FOUR: Get inside our February issue 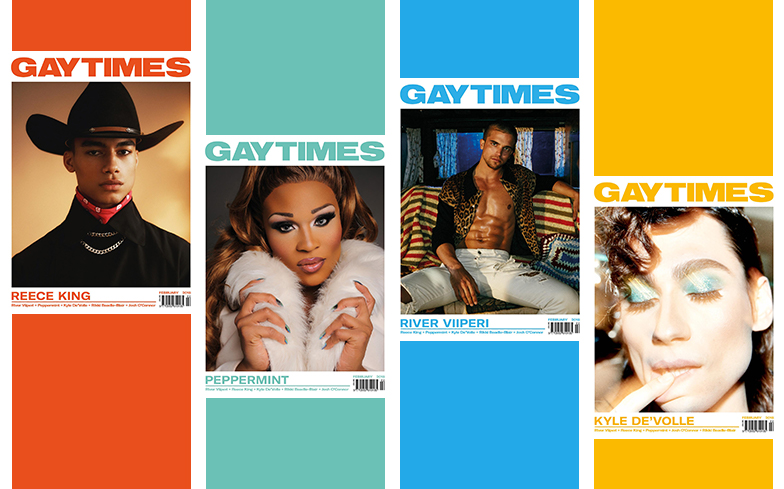 In the third instalment of the new and improved Gay Times, we present four covers that each represent different sections of our community: gay, bisexual, transgender, ally.

Reece King is Instagram royalty. Currently taking the world by storm, we caught up with the bisexual model for a frank discussion on his sexuality, sudden social media fame and inclusivity in the fashion industry. As bi-phobia runs rampant even within the queer community, Reece shares his positive affirmation on remaining true to yourself…

“I think the more confident I became with who I am, anything that I put my mind to, I was always my best self. I don’t know why, but I feel like in modelling and on social media, I know that when I’m just being myself, I’m always well respected.” Peppermint was the first openly trans contestant to appear on RuPaul’s Drag Race, and is the first trans woman to appear on the cover of Gay Times. Not only a fierce queen, Peppermint is fiercely political and looks forward to the bright future of further trans representation in media.

“We need lawmakers in our favour. Lawmakers must be diverse as possible from all races, genders and sexualities to reflect the societies they are representing. We’ve had a number of lawmakers around the world step into the light who are queer and that’s fantastic and it feels
essential now.” River Viiperi is a proud and outspoken ally to the queer community, with positive affirmations and posts dotted across his social media channels. Debuting his new look exclusively with Gay Times, River speaks on his affinity with his LGBTQ siblings, not giving a fuck, and championing diversity on the runway.

“Life is all about being yourself and to be able to become the best version of yourself. The only way of doing that is expressing your feelings, talking about your problem and thoughts. I do believe that a lot of LGBTQ people are the truest form of that as they give zero fucks about what people think. They just are themselves and, in a way, that inspires me to do the same in my own life and work.”

Far from ‘just another celebrity stylist’ Kyle De’Volle has made a name for himself as an empowering fashionista the world over. Famously styling Rita Ora, the West London native has now launched the platform C4KE, which aims to spark confidence among the new queer generation – encouraging them to pursue their passions and to be themselves unapologetically.

“I think everyone’s kind of having the confidence to admit who they wanna be. I think there’s been such a stigma of people thinking that they have to follow other people and dress the same and wear a bodycon dress and a pair of Louboutin heels. Do you know what I mean? I really think this year has been the change. You’ve got Edward Enninful being the first gay, black, male editor of Vogue and I think that’s fucking brilliant. You’ve got models like Winnie Harlow that are breaking boundaries. There’s so much going on. It’s very productive.”

This month, Gay Times places its focus towards our community. Sharing personal stories and accounts from all corners of the vast LGBTQ spectrum, Rikki Beadle-Blair has guest-edited an entire section in order to amplify queer voices from up and down the country. In celebration of LGBT History Month, queer historian Sebastian Buckle has cast a lens on to our often forgotten past, with a positive outlook for the future and a reminder for how much more still needs to be done as we strive towards total equality.

Elsewhere in the issue: Josh O’Connor on creating the romance of God’s Own Country; viral Vine star Parker Kit Hill shares his favourite queer spaces in NYC; Nakhane Touré on living as openly gay man in Africa; Marc Sebastian on using his platform to fight homophobia; Pansy Ass Ceramics share some of their sex-positive creations; 560 images of men’s bums; plus music, film, fashion and much more.

Get your copy now at gaytimes.co.uk/buy.