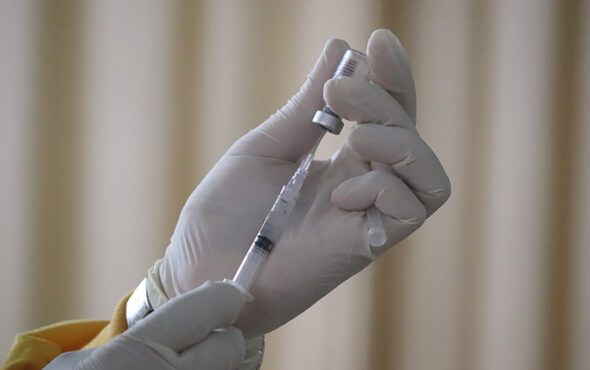 Nasira Manojee, an HIV-positive transgender woman from Karachi, had to ignore her friends’ advice and overcome her own worst fears before getting vaccinated against COVID-19.

“I knew I was doing the right thing as I have faith in the top-notch doctors who are urging everyone to get vaccinated,” said Manojee, 42, who has been taking antiretroviral medication for HIV since 2017.

But it was a difficult decision, and Manojee is jittery about going back for her second shot, reflecting widespread vaccine hesitancy among trans Pakistanis as the country fights to boost inoculation rates in all segments of the population.

Despite official medical advice for them to get vaccinated, many trans Pakistanis fear they could be at risk of side effects due to high rates of pre-existing conditions such as HIV, hepatitis C or complications from gender reassignment surgery.

“My friend told me I may get sick since I have HIV,” said Manojee, who has turned to begging since pandemic curbs put a stop to her usual work as a dancer at social gatherings.

Pakistan’s parliament recognised the third gender in 2018, giving trans people fundamental rights such as the ability to vote and choose their gender on official documents.

But many members of the trans community remain on the margins of society and often make a living through begging, dancing or sex work.

According to UNAIDS, the joint U.N. Programme on HIV and AIDS, people who are HIV-positive may suffer “more severe outcomes” from COVID-19 and should be vaccinated, regardless of their CD4 or viral load.

Countries should consider people living with HIV as a high risk group for COVID-19, priorisiting them for vaccination, it said in June.

At least six international HIV/AIDS experts told the Thomson Reuters Foundation late last year there was no evidence to suggest HIV-positive people were at risk from COVID-19 vaccination.

But anxiety about possible adverse reactions is not the only reason many trans Pakistanis are hesitant about getting the jab.

Zehrish Khanzadi, 29, who works at Gender Interactive Alliance, an organisation dedicated to transgender rights, had to pluck up enough courage to stand in line with the other women at the vaccination centre.

“I was nervous and conscious of standing in the women’s line and was bracing for something untoward to happen,” she said.

Her fears were proved right when she and her friend were asked to step aside and let the others waiting in line go first.

“Me and my friend stood our ground and refused so it ended there,” she said, the pride evident in her voice.

It is difficult to know exactly how many trans people have been vaccinated so far in Pakistan, which has seen soaring coronavirus infections fuelled by the Delta variant.

While national identity cards offer the option of the third gender, many trans people continue to identify as male or female to avoid discrimination.

In addition, gender is not a question asked while administering the vaccine.

“This is unfortunate and likely an oversight when the system was developed,” said Syed Faisal Mahmood, infectious diseases specialist at Karachi’s Aga Khan University Hospital, adding that trans people were often overlooked.

“They are forgotten by people making the policies who do not routinely deal with transgender people,” he said.

Aradhiya Khan, 23, who works in the human resource department of a corporation in Karachi, decided to go for her vaccination late at night.

“I went at 2 a.m. when there were very few people around. My mother was with me and we stood in the women’s line,” Khan said.

Although they did not have to wait too long, Khan said she felt uncomfortable at the vaccination centre – stared at by a group of young male volunteers who asked her to show them a tattoo on her forearm.

While it was not a pleasant experience, she posted a photograph of herself being vaccinated on social media afterwards – hoping to encourage other trans people to get the jab.

“It is our responsibility to get vaccinated to protect ourselves as well as others from getting infected,” Khan said, urging the government to hold special inoculation camps for members of the trans community.

Manojee said that would also make it cheaper for people to travel to vaccination centres.

Authorities in Sindh province, where she lives, are set to launch mobile immunisation units to encourage vaccination among all social groups.

“The community can come in groups splitting rickshaw fares in these times of financial slump,” Manojee said.

More importantly, she added, it would mean “no fear of being humiliated or asked to step aside from the queues”.