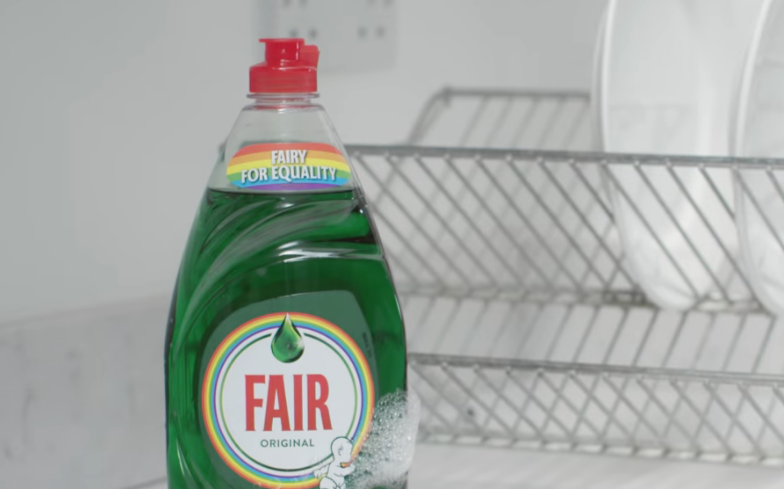 Fairy has released a powerful video about LGBTQ acceptance.

Washing up liquid brand Fairy has partnered up with the Albert Kennedy Trust (akt) in a new campaign to promote LGBTQ acceptance.

As part of the campaign, which will launch in July, Fairy has changed its name to Fair and has adorned its bottle in rainbow colours. The brand will also be donating £50,000 to the akt, and for each bottle sold another donation will be made.

Fairy also conducted a study, called The Fair Report and found that 69% of respondents would support their children being in a same-sex relationship and adopting a child.

Other statistics found that 59% thought they should talk to children positively about LGBTQ issues, but sadly 18% felt that LGBTQ parenting had no place in 2019.

A short video for the campaign was also released, featuring representatives from Fairy, the akt and former Blue singer Duncan James, who came out as gay in 2014.

During the video, Duncan speaks about the acceptance he got from fellow bandmember Simon Webbe as well as his mother, however he reflected that this wasn’t the case for many other LGBTQ people.

He said: “What was upsetting for me is the fact there’s still a large number of vulnerable kids out there, who are taking the brave step to come out and being rejected by their family and their loved ones.”

Figures released by the akt estimate that one in four homeless people in the UK are LGBTQ, and a further 77% of those believe that rejection or abuse from their family because of their identity is what led to their situation.

Tim Sigsworth, the CEO of the akt, explained in the video that he hoped a child seeing the rainbow logo on the bottle would open up conversations with their parents and ultimately lead to more acceptance.

Tom Moody, the vice president and general manager of P&G Northern Europe, the parent company of Fairy, said: “Whilst there has been huge progress in equality in the UK, there’s still room for greater fairness.

“In partnership with akt, our FAIR campaign recognises and celebrates the diversity in family life today.

“When people chose a limited edition FAIR bottle and place it by their sink at home, they’ll be supporting a fabulous cause and our vision to create a world free from bias where everyone is free to be themselves.”