Exclusive: Read Sadiq Khan’s letter to the LGBTQ community ahead of Pride in London 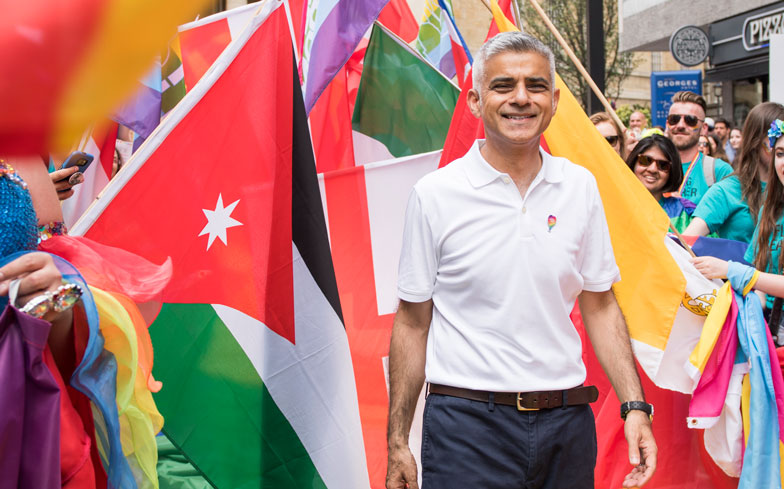 London is the greatest city in the world and I’m incredibly proud to live in a city that celebrates its diversity.

Pride in London is a wonderful example of our city at its best. It’s a time when we come together as one to celebrate the contribution of the LGBTQ community in our capital and show that we are one of the most LGBTQ friendly places on earth. It’s a world-renowned festival and a guiding light to those countries that still criminalise same-sex relationships and deny transgender people their rights. Thirty years on from the dark days of Section 28 being introduced in the UK, I want LGBTQ people in oppressive environments around the world to know we stand with them and we march for them too.

Ahead of this year’s festival, I’ve been reflecting on the sort of city London would be without the contribution of the LGBTQ community. Ours would be a diminished capital. Less accepting, less interesting, less colourful and far less at ease with itself. The LGBTQ community has played a unique role in shaping culture, broadening public horizons and affirming individual freedom. The struggle for LGBTQ equality has, in many ways, helped liberate us all and enhance our understanding of diversity.

For too long we’ve been presented with a limited picture of history. LGBTQ figures, where they were referenced, found themselves either demonised for, or defined by, their sexuality. Individual achievements risked being undermined by prejudice and pioneers found their sexual identities erased to appease a hostile public. I’m glad to say that today in London things are different and we celebrate LGBTQ contributions in all aspects of society. Despite London being an emblem of diversity and progress, I know there is still work to be done. As in the rest of the UK, LGBTQ young people are disproportionately likely to face homelessness, experience depression and anxiety and suffer abuse and harassment. This is simply not good enough. Who you are and where you’re from should have no bearing on what you can achieve.

LGBTQ Londoners deserve complete equality, but sadly I still hear of couples feeling uncomfortable expressing themselves in public and being discriminated against for doing so. When I was elected, I pledged to be a Mayor for all Londoners – a promise I take extremely seriously. The safety, liberty and representation of LGBTQ people across our city is hugely important to me. That’s why we take a zero-tolerance approach to hate crime in all forms. There is absolutely no place for homophobic, biphobic and transphobic abuse in our city and I will continue to work with the Met and anti-hate organisations to stamp it out.

At a time when our society can feel increasingly divided, Pride shines as a beacon for love. And in an age where people can be less vocal about what they are for, rather than what they are against, Pride provides a vital opportunity for unity and solidarity. I’ve been touched by stories of young people who, having wrestled privately with their sexuality or gender identity, felt not only visible but valued by attending Pride. The sight of so many people, from all backgrounds, lining the streets is truly wonderful. This year’s theme for Pride in London is #PrideMatters with people invited to consider what Pride means to them. For me it is about celebration and affirmation but the wonderful thing about Pride is it can represent different things to different people.

So, as we prepare to march for love, acceptance and in solidarity, I want to thank the LGBTQ community for continuing to welcome me with open arms. As we enjoy the joy and laughter of Pride, let’s celebrate how far we’ve come as a society and look forward to an even brighter future. Pride shows that London welcomes everyone, regardless of age, race, religion, disability, gender or sexuality. So just come as you are, London is open.