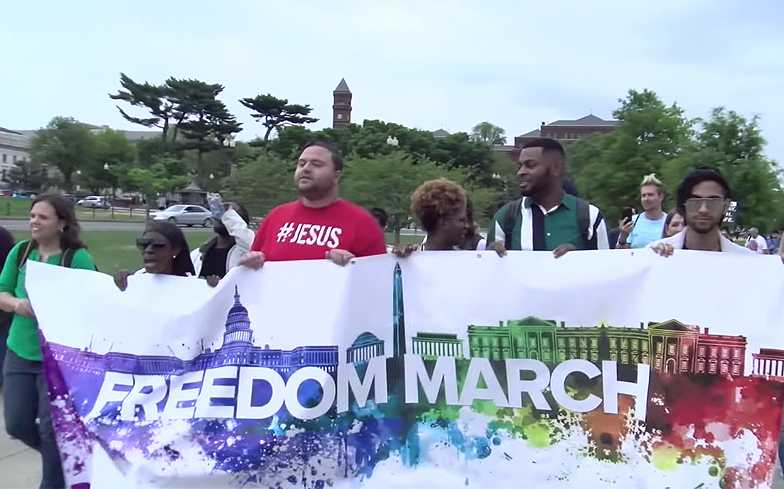 Ex-LGBTQ activists were left humiliated this weekend after only 36 people showed up to their gay conversion therapy march.

The fundamentalist Christian event promoted the belief that people gain “freedom from homosexual/transgender lifestyles by the grace and power of Jesus Christ.”

Daren Mehl, president of Voice of the Voiceless, told The Christian Post that the Freedom March was “an opportunity for those of us who have a new life with Jesus to come together in fellowship and praise Him for the love and grace available to everyone who seeks it [and] to testify publicly of the life-changing grace available to leave the LGBT identify for something greater.”

Despite the event being heavily promoted on social media, only three dozen people turned up.

McCall, donning a ‘#Jesus’ t-shirt, told the crowd: “Everyone has marches, all kinds of views and opinions. So I said, ‘I don’t really know about a march for people coming out of the LGBT [community] to follow Jesus so I want to do that.’”

Prior to the event, Ruiz posted on Facebook: “I am Marching May 5th of 2018 because I am free.

“Come join us in Washington DC for this fight that has already been won at the cross for our freedom. It’s not a GAY to STRAIGHT thing but a LOST TO SAVED thing.”