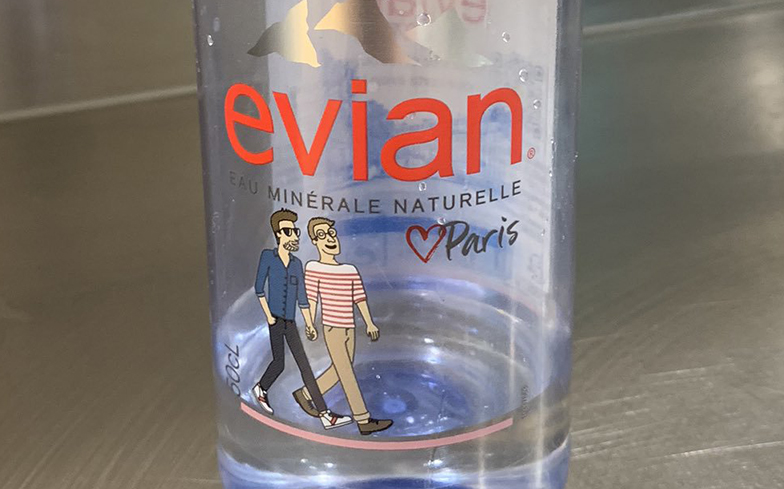 Evian France has hit back at critics of their LGBTQ-inclusive water bottle design.

As part of their ‘prestige’ range – which debuted last year – one bottle features a cartoon of two men holding hands while walking past the column of the Bastille, which is located near Paris’ gay-friendly district Le Marais.

The drawing, from graphic designer Tiffany Cooper, is one of twelve illustrations featuring Paris neighbourhoods and people. Others include a woman shopping near the Arc de Triomphe and a jogger outside the Notre-Dame Cathedral.

Back when the designs were announced, critics accused the water brand of “promoting” homosexuality and “wishing to destroy the traditional family”, while others even called for a boycott.

And it seems even now, a year later, the drawing is getting homophobes worked up.

In a video shared on Twitter, a man can be seen complaining about the bottle design before throwing it into the bin. The caption accompanying the video accuses Evian of ‘imposing’ their ‘propaganda’ on consumers.

The tweet faced backlash from many, while others simply mocked his views. “Too late, you just have to touch the bottle and you become gay. Thank you for your purchase and contribution to the powerful lobby,” joked one Twitter user.

He even got a shoutout from Evian France’s official Twitter account, who told him to “delete your account” through the power of a meme. The reply has received over 240,000 likes and 80,000 retweets, far outweighing the original tweet.

In a press release last year, Evian said the drawings were “not intended to promote anyone” but assured that the brand was “open and respectful of everyone and representative of the company without barriers.”