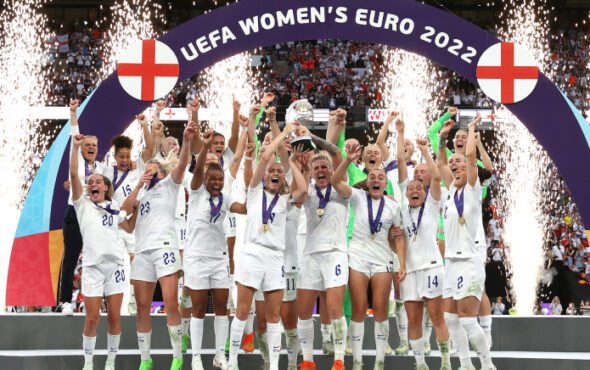 Over the last few weeks, the country’s women’s team has dominated the competition with landmark wins against Austria, Norway, Northern Ireland, Spain and Sweden.

On 31 July, the Lionesses faced off against eight-time European champions Germany in the event’s final match at Wembley Stadium.

After delivering an array of electric plays throughout the first half, Ella Toone put England in the lead with a jaw-dropping chip at the start of the second half.

However, Germany’s Lina Magull took the game into extra time after she landed a goal during the last 11 minutes of the final.

But in the end, Chloe Kelly cemented England’s 2-1 victory with a magnificent winning goal.

After landing the showstopping play, the game’s record-breaking 87,192-person crowd erupted into applause before singing Sweet Caroline, as reported by AP News.

In an interview with the BBC, Toone opened up about the team’s first-ever championship win, stating: “It doesn’t seem real. I’m buzzing my head off. Honestly, the best moment of my career, best moment of my life. I’m so proud to be a part of this group.”

🎞️ Road to the final: @Lionesses 🦁

“It’s amazing. It’s something I have dreamed of for a long, long time. It’s incredible. I got to 2015 and we have been in a few semis since then. This is amazing, players coming off the bench to help us get the win,” Kirby said.

Mead added: “I can’t believe it. Sometimes football puts you down but bouncing back is the best way. I am speechless. I am in shock. I’ve just had a good cry with the family, I wouldn’t be here without them.

Alongside the overall Euro 2022 win, Mead also earned the championship’s coveted Golden Boot and Player of the Tournament titles.

Since England’s monumental win, fans have taken to social media to celebrate the impactful team.

One user wrote: “Was 9/10 years old when I started playing football, and I was the only girl in a mixed team… this win means the f*cking world to me and hope it inspires a whole generation of young girls to kick a ball and get stuck in.”

Another user tweeted: “Absolutely magnificent achievement by the England #Lionesses to win Euro 2022. An absolutely massive moment for women’s football and also women’s sport in England.”

Congratulations are in order for the Lionesses and their groundbreaking victory!

A moment for the history books ✍️