Elton John, Stephen Fry and Dua Lipa among the celebrities calling for a ban on ‘conversion therapy’ 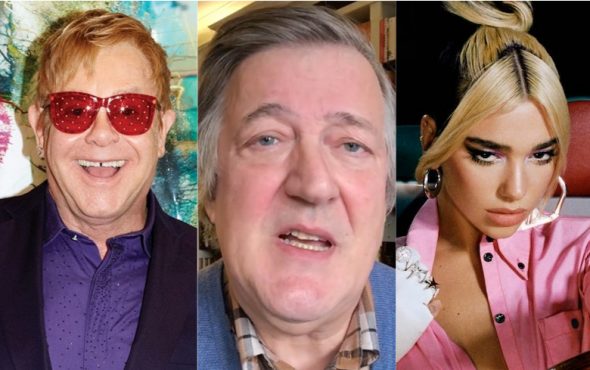 Celebrities and charities including Sir Elton John, Amnesty UK and Stonewall have signed an open letter to Downing Street calling for conversion therapy to “finally” be made illegal in the UK.

An open letter to Boris Johnson and Downing Street calling for a full ban on gay ‘conversion therapy’ for all LGBTQ+ people in the UK has attracted the support of numerous celebrities.

Campaigners are urging the government to act now on a two-year-old promise to make the practice illegal. Led by Ban Conversion Therapy, a new group which works closely with LGBTQ+ charities and human rights organisations, they are calling for a comprehensive and swift ban of the discredited practice.

One of the group’s founders, Harry Hitchins, is a gay film director, who shared a now-viral post on Instagram about ‘conversion therapy’ still being legal in the UK. The video saw him attacked and threatened by Christian and far-right groups aiming to silence his views on conversion therapy.

Matthew Hyndman, another of the group’s founders, is an activist and creative from Northern Ireland. When he was younger, ‘conversion therapy’ was offered to him.

“We are fighting for a comprehensive ban on conversion therapy for all lesbian, gay, bi, trans and gender diverse people in the UK, supported by a programme of work to help tackle these practices in all their forms,” they said in a statement.

Truss has previously backed the ban, but the group are fairly concerned that this will not be far-reaching enough and will fail to protect LGBTQ+ community.

Part of the open letter, which can be read in full here, reads: “The International Rehabilitation Council for Torture Victims has said that conversion therapy is torture. The U.N. has called for the end to conversion therapy globally.

“A Memorandum of Understanding on Conversion Therapy in the UK was signed in 2015 and again in 2017 by all major UK medical and psychotherapy organisations. The Royal College of Paediatrics and Child Health released guidance for a more affirming approach supporting LGBTQ+ children and young people.”

It adds: “Any form of counselling or persuading someone to change their sexual orientation or behaviour so as to conform with a heteronormative lifestyle, or their gender identity should be illegal, no matter the reason, religious or otherwise – whatever the person’s age.

The letter also highlighted the risks faced by the trans community, saying: “There has been a growing, dangerous suggestion that trans healthcare should be prevented on the basis that it is itself a form of conversion therapy.

“This will further contribute to the demonising of trans people within the UK. The issue of conversion therapy will not be remedied by questioning trans people and trans youth, who are already a particularly vulnerable group.”

“We don’t allow attacks against people based on sexual orientation or gender identity and are updating our policies to ban the promotion of conversion therapy services,” Tara Hopkins, EMEA public policy director, Instagram told BBC News.