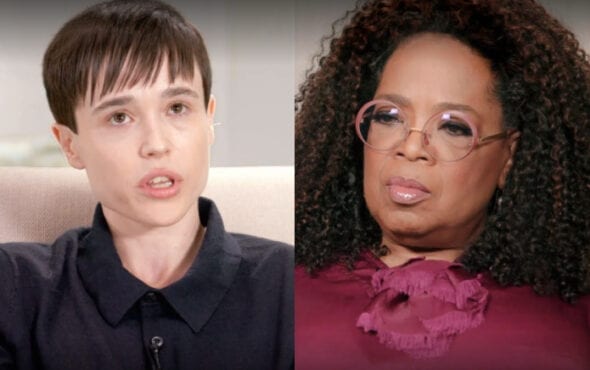 Elliot Page will sit down for a discussion about transgender issues with Oprah Winfrey for Apple TV.

Vanity Fair released a preview of the interview on Wednesday (28 April), which sees the Oscar-nominated star discuss his coming out journey and the various anti-trans bills that are being introduced in legislature.

In the clip, Elliot tells Oprah that it felt “crucial and important” for him to disclose his transgender identity with the world due to the “horrible backlash” towards the community in the United States – and to inspire transgender youth.

He expanded on this in an accompanying interview with Vanity Fair. When asked why he felt the need to sit down with Oprah, Elliot admitted: “It was something I needed to sit with for a moment, because the backlash right now is so intense.

“But the rhetoric coming from anti-trans activists and anti-LGBTQ activists—it’s devastating. These bills are going to be responsible for the death of children. It is that simple.”

Elliot said he wanted to use Oprah’s “wide-reaching platform” to open up about his own transition, including some of the life-saving resources he’s been able to access “whether therapy or surgery, that have allowed me to be alive, to live my life.”

“Actually, I was really nervous. But I thought about it for a bit, and it just felt like, Okay, the GOP basically wants to destroy the lives of trans kids and stop the Equality Act. How do you not use this platform?”

Elliot came out as transgender/non-binary in December 2020 in a powerful statement on social media, in which he wrote: “My pronouns are he/they and my name is Elliot. I feel lucky to be writing this. To be here.

“To have arrived at this place in my life. I feel overwhelming gratitude for the incredible people who have supported me along this journey. I can’t begin to express how remarkable it feels to finally love who I am enough to pursue my authentic self.”

In his interview with Vanity Fair, Elliot said he’s never been more comfortable with himself since coming out.

“For the first time in, I don’t even know how long, [I am] really just being able to sit by myself, be on my own, be productive, and be creative. It’s such an oversimplification to say it this way, but I’m comfortable,” he revealed.

“I feel a significant difference in my ability to just exist—and not even just day to day, but moment to moment.”

You can read Elliot’s interview with Vanity Fair in full here. His conversation with Oprah will air this Friday (30 April) on Apple TV.