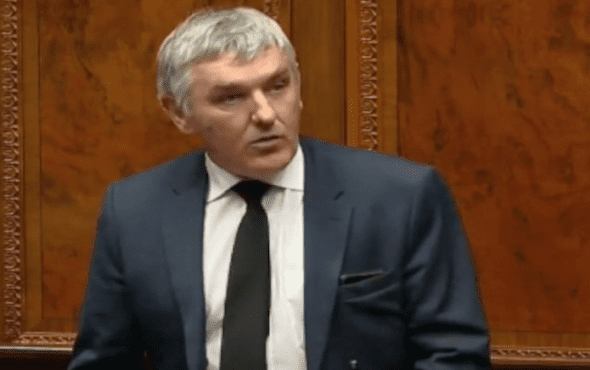 DUP MLA Thomas Buchanan has faced backlash for sharing a Facebook video that urges the LGBTQ+ community to turn away from their “sinfulness”.

West Tyrone MLA Thomas Buchanan has been condemned due to recirculating a video from a self-identifying “ex-gay” Oklahoma women, Allison Nunley, who claimed she was no longer gay after following Christianity.

The video called for the gay community to “turn from false idols and fleeting pleasures”.

Speaking to the Belfast Telegraph, Councillor Stephen Donnelly said politicians “have a duty” to stand up for minorities.

“LGBT people in West Tyrone deserve better than having their very existence being opposed by their local DUP MLA,” he said.

“Instead of targeting and attempting to stigmatise them even further, Mr Buchanan would be better speaking to LGBT people and hearing first hand how damaging posts such as his are.”

Communities are strengthened by diversity and differences should be respected instead of “cruelly dismissing people as sinful because of how they were born”, Cllr Donnelly said.

Public representatives have a duty to stand up for inclusion of minorities.

I am calling out Tom Buchanan’s spreading of malicious anti-LGBT propaganda.

LGBT people in West Tyrone deserve better than having their very existence opposed by DUP MLAs elected to lead our community. pic.twitter.com/YfHydnoTY3

“Not this Anti-LGBTQ+ message, it’s outdated and shows why we need a law banning conversion therapy in all its forms!”

John O’Doherty, director of The Rainbow Project, told Belfast Live: “We are disappointed but not surprised to see DUP MLA Tom Buchanan once again sharing anti-LGBTQIA+ messaging on social media.

“Mr Buchanan would be better off listening to the lived experiences of LGBTQIA+ people in his local constituency, including those whose lives have been immeasurably impacted by conversion therapy, than sharing posts like this.”

Conversion therapy is the practice of attempting to ‘erase, repress, cure or change’ someone’s sexual orientation or gender identity through forms psychological and physical methods.

At its most extreme, it involves shock therapy where LGBTQ+ people are subjected to jolts of electricity while watching scenes of same-sex affection.

O’Doherty added: “We urge the new DUP leadership to pro-actively engage with LGBTQIA+ people from across Northern Ireland and not limit themselves or their vision for Northern Ireland to these outdated and life-destroying beliefs.”

Buchanan has previously faced criticism for expressing controversial comments. In April the DUP MLA was condemned for being “condescending and disrespectful” towards LGBTQ+ activists.

The politician stated the act to ban conversion therapy would not offer “protection for Christian ministers and pastors of the gospel who set for the way of eternal life for all people through faith and repentance in the Lord Jesus Christ as their saviour”.