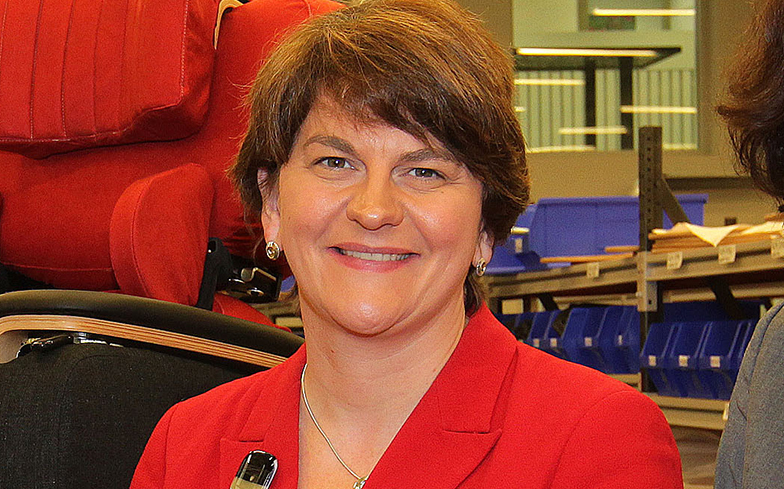 She also hinted that equal marriage could come to Northern Ireland.

The leader of the DUP, a party known for its members having homophobic views, Arlene Foster has told Guardian journalist Owen Jones that gay couples have the “right to express their love.”

Jones confronted Foster over her and her party’s views at the Conservative Party Conference, which was held in Birmingham earlier this week. Foster agreed with Jones that “gay people fall in love just like straight people.”

She then added: “They do have the right to express their love, nobody’s talking about anybody not being able to love another person. [But] I believe that marriage is between a man and a woman.”

Jones then brought up how most people in Northern Ireland disagreed with Foster’s view, something that she admitted “might well be the case.”

There have been calls for Parliament to introduce equal marriage in Northern Ireland, due to the fact that the Northern Irish Assembly isn’t functioning after the governing parties, the DUP and Sinn Féin failing to reach a power-sharing agreement.

Although some legislation has passed some hurdles, Foster was adamant that the issue should be dealt with by the Northern Irish Assembly when it is able to function again.

“Owen, as you know, this is a matter for the Assembly,” Foster said. “If the Assembly was back, and I want the Assembly back as quickly as possible, I’m quite sure it will come to the floor of the Assembly and I think people should wait and see.”

She then hinted that a returned Northern Irish Assembly could indeed legalise same-sex marriage in Northern Ireland, the only part of the United Kingdom where it is not already legal.

Foster said: “Of course, the composition of the Assembly has changed and the Petition of Concern is no longer available because we don’t have the 30 members, because the Assembly has shrunk from 108 members to 90 members, and therefore I think we need to allow the Assembly to have its space to debate this.”

The Petition of Concern was invoked by the DUP to veto a vote by the Northern Irish Assembly that would have seen same-sex marriage become legal.

When asked about the lack of the veto, Foster said: “I don’t regret the fact the DUP won’t be able to veto it, I’m just simply saying the reality is, it’s for the Assembly to decide, and when the Assembly comes back which I hope is very, very soon, I’m sure this is an issue that will come through.”