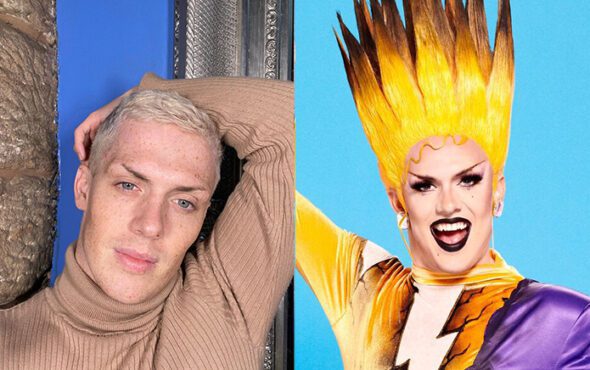 Elektra Fence has shared that she “was the subject of a homophobic attack” on a train from London to Manchester on 24 April.

The 30-year-old said that during a trip to get a cup of tea during her journey, she “passed a group of nine people (five male, four female).”

“One of the men jumped out at me, making me scream and the group went on to call me various homophobic slurs as I passed,” Elektra wrote on social media.

After opting to ignore them, particularly because she was travelling alone, she said they physically assaulted her when she returned.

“On my way back to my seat one of the men grabbed me and I was pushed on top of him, at which point he pulled open my jacket,” the Drag Race UK star further explained. “Other members of the group then began putting their hands on me. It was incredibly aggressive and frightening and I felt totally helpless.”

Elektra said that she was able to get out of the man’s grip thanks to a self-defence move she learned on TikTok, and was then subjected to further verbal abuse.

After reporting the incident to one of Avanti West Coast’s managers, she was supported and made to feel safe as he looked after her until she reached her destination.

“I later learned that a staff member received racist abuse from these people,” Elektra continued. “The police were called but did not turn up to investigate at Crewe station where the group got off.”

Despite her ordeal, she assured fans that she is okay and will “never change” because of other people’s ignorance.

“Despite this, I should not have to deal with or process an incident such as this in this day and age,” Elektra added.

Responding to the social media post, a spokesperson for Avanti West Coast promised that the incident will be “looked into further.”

We are really sorry to hear that this happened onboard one of our trains Elektra, no one should have to experience that. Really glad to hear our TM Lee was there to support you ❤ If you are able to DM us with the journey details, we'll get this looked into further. – Carmen https://t.co/YgYHqCSEER

“We are really sorry to hear that this happened onboard one of our trains Elektra, no one should have to experience that,” the tweet said. “Really glad to hear our TM Lee was there to support you. If you are able to DM us with the journey details, we’ll get this looked into further.”

A spokesperson from the company told GAY TIMES: “We’re really sorry to hear of this incident and are in touch with the customer. No one should have to experience homophobia and it will not be tolerated on our trains.”

Galop is an LGBTQ+ charity there for those who have experienced abuse or have been the victim of a hate crime. It can be contacted Monday to Friday from 10am-4pm on 0207 7042040 or at HateCrime@galop.org.uk. More information is available here.