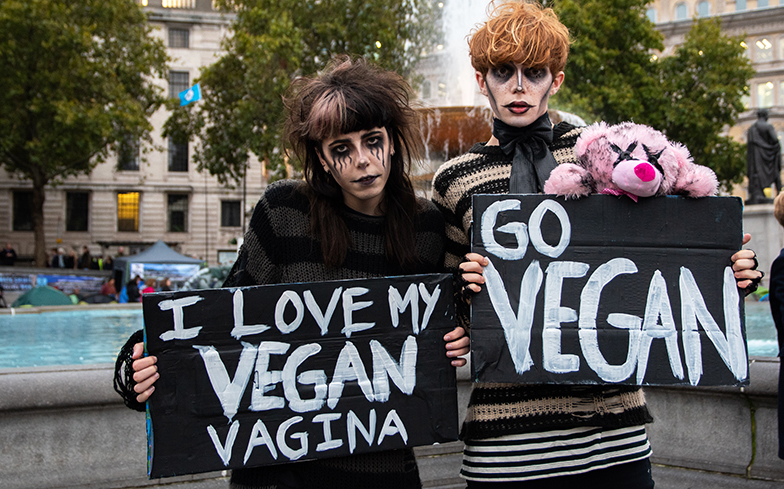 The RuPaul’s Drag Race UK star and girlfriend Pussy Kat appeared at the demonstration in Trafalgar Square to bring attention to the damage being caused to the planet by climate change.

“Basically, the world is going to shit, and we need to do something about it right now,” they told animal rights group Moving Animals.

“There’s proof in history that the only way to make change happen is by standing up and fighting for it and that is exactly what we are here to do.”

Extinction Rebellion describe themselves as “an international movement that uses non-violent civil disobedience in an attempt to halt mass extinction and minimise the risk of social collapse”.

Scaredy and Pussy explained that they both turned vegan after watching 2005 documentary Earthlings – which looks into humanity’s use of animals as pets, food, clothing and entertainment – adding that a “vegan future would be amazing”.

“We had no idea. We grew up being told that you need milk for healthy bones and meat to be strong,” they continued.

“Then Earthlings was one of many documentaries that completely shows that isn’t the case, it’s not a happy ending for the animals and [Earthlings] exposed the truth of what is really out there.”