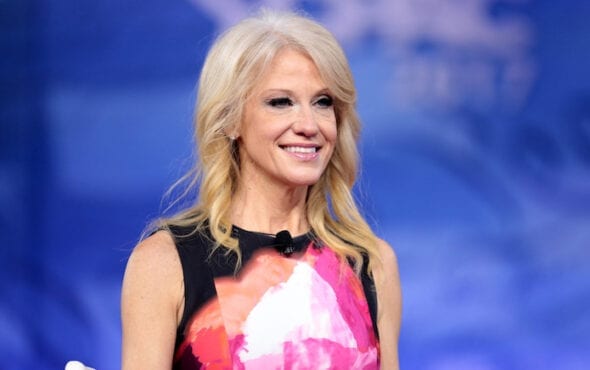 Earlier today, Kellyanne Conway announced she is resigning from her post as senior adviser to US President Donald Trump.

In a shared online statement, Conway expressed her gratitude towards her position, stating she is “deeply grateful” and that her departure from the Trump administration is “completely [her] choice”. The Republican closed off the statement summarising the change in her path will be, as she puts it, “less drama, more mama”.

While Conway’s prepared statement presents an effort to paint a tidy exit out of the White House, scripted words are not enough to ignore many of her incredibly divisive opinions. In October 2017, the senior advisor, along with President Trump, spoke at the Family Research Council‘s Values Voter Summit which is known for its anti-LGBTQ+ sentiments.

Outside of her White House career, the pollster has continually used aggressive language towards the LGBTQ+ community. In 2017, she was quoted criticising the portrayal of lesbian parents in a children’s PBS show, saying it’s not a matter of “right versus left, but right versus wrong,” and that people “don’t want their kids looking at a cartoon with a bunch of lesbian mothers.”

The political figure and familiar face on Fox News has not held back in her past comments or involvement in politics. As the news about Conway’s resignation surfaced, her daughter, Claudia, 15, swiftly tweeted on how her mother’s job has impacted her life. She tweeted: “My mother’s job ruined my life to begin with. Heartbreaking that she continues to go down that path after years of watching her children suffer.”

Conway has continued to make headlines for her quick remarks and her most memorable being the phrase “alternative facts”. Speaking in defence of former White House Press Secretary Sean Spicer, Conway responded, during an interview with Chuck Todd: “You’re saying it’s a falsehood. And they gave alternative facts”.

Conway is still scheduled to speak at the Republican National Convention on this Wednesday.