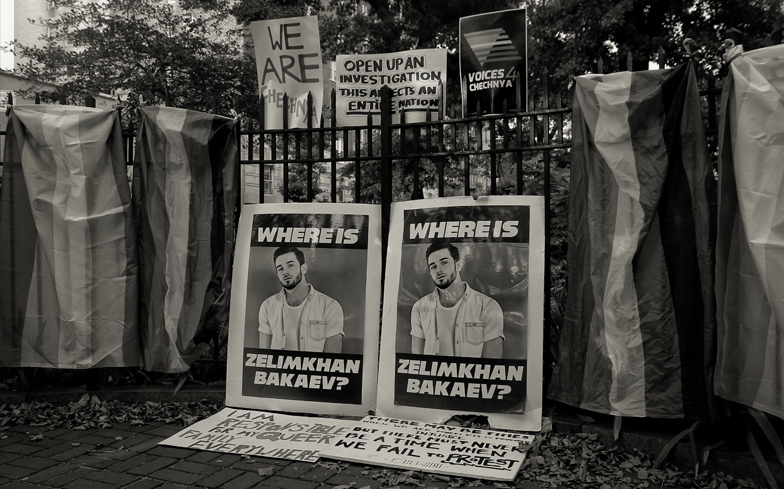 Activists came together in New York City earlier this week to mark one year since the disappearance of Russian singer Zelim Bakaev.

The popstar was reportedly bundled into a car back on 8 August, 2017 after landing in Grozny – Chechnya’s capital city – to attend his sister’s wedding.

It was amidst the Russian republic’s anti-LGBTQ purge, where many gay men were rounded up and sent away to modern-day concentration camps. Since his disappearance, both the Chechen and Russian authorities have denied knowing anything about his whereabouts.

Chechen leader Ramzan Kadyrov later claimed that Zelim was killed by his own family for being gay, but that has been denied by his closest ones. Despite many requests, the Russian Investigative Committee has not launched an attempt to locate his whereabouts.

It means there is currently no conclusive evidence if he is dead, alive, in the country, or the condition he is in. Activist groups Voices4 and RUSA LGBT teamed together to stage a demonstration on Wednesday, 8 August, 2018 at the Stonewall National Landmark Park to raise awareness of Zelim’s disappearance one year after it happened. A primary goal of this demonstration was to also amplify the voices of Chechen asylum seekers living in the Netherlands.

They have created a new group called LGBT World Beside with the aim to have an impartial and effective investigation into the abduction of Zelim Bakaev in the Chechen Republic conducted. What’s more, their demands include ensuring the absence of impunity for the perpetrators, and to provide legal and physical protection of victims, their families and witnesses of the abduction of Zelim.

Finally, they want the recommendations of the European Commission against Racism and Intolerance fully implemented, and for an international independent investigation to be allowed.

To find out more about LGBT World Beside and their demonstration for the disappearance of Zelim Bakaev, click here.