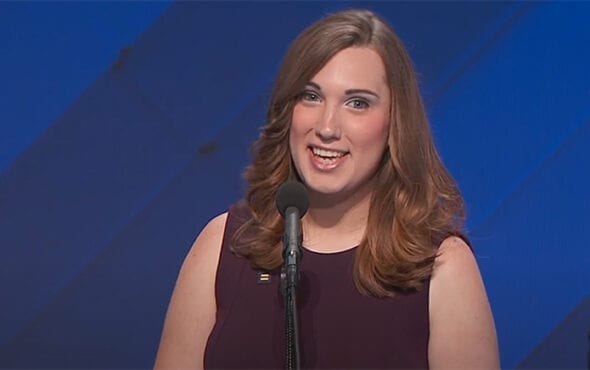 Sarah McBride has become the first openly transgender person to be elected to the US state senate.

The politician made history when she won for the Democrats in Joe Biden’s home state of Delaware at just 30 years old, making her highest ranking transgender public official in the United States.

“I hope tonight shows an LGBTQ kid that our democracy is big enough for them, too.”

McBride first got into politics by interning at the White House during Barack Obama’s presidency where she, again, made history as the first openly transgender person to work there.

In 2016 she addressed the Democratic National Convention with a speech where she celebrated the real opportunity of being able to elect LGBTQ+ candidates across the United States.

“It is my fervent hope that tonight a young person in Delaware […] or anywhere in this country can go to sleep tonight […] with a powerful but simple message: that our democracy is big enough for them too.” – @SarahEMcBride #ElectionNight #UnityWins (📹: @cmclymer) pic.twitter.com/1zMbGSYHeq

While McBride is the first openly trans person to be made state senator, there are a number of trans people across the US legislature already.

Three years ago, Democrat Danica Roem became the first openly trans elected official in the US when she won a place in the Virginia House of Delegates.

McBride joins a number of LGBTQ+ people who celebrated victories at the 2020 US Election, including Jabari Brisport who became the first LGBTQ+ person of colour to be elected to the New York State Senate, and Mauree Turner who has become the first non-binary lawmaker in the United States.

The result of the 2020 US Election is one of the closest in recent history, with the counting of the ballots spilling into a second day before any clarification of a winner can be determined.

While polling has shown Joe Biden as having a clear lead in recent weeks, Donald Trump has made unexpected gains in certain states resulting in a tight contest between the two candidates.