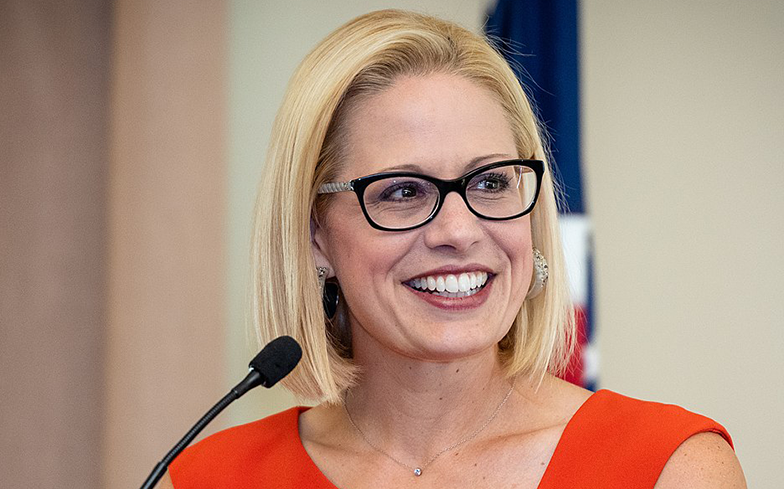 US House office of photography

Kyrsten Sinema has become the first openly bisexual person to be elected to the US senate.

The Democratic congresswoman defeated Republican candidate Martha McSally, a longtime opposer of marriage equality who has constantly come out in support of anti-LGBTQ policies.

“As long as I’ve served Arizona, I’ve worked to help others see our common humanity & find common ground,” she posted on Twitter after her win.

“That’s the same approach I’ll take to representing our great state in the Senate, where I’ll be an independent voice for all Arizonans.”

Throughout her political career, Sinema has repeatedly vowed for equal rights, having co-sponsored the Equality Act and protections for the LGBTQ community.

“For more than a year, HRC has worked to organize 800,000 equality voters across the state and we are proud to have helped Senator-elect Sinema across the finish line in a tight race.

“We celebrate this incredible moment and look forward to rolling up our sleeves and getting to work with Sinema, and Arizona Congressmembers Tom O’Halleran, Ann Kirkpatrick, Raul Grijalva, Ruben Gallego, and Greg Stanton to move equality forward for all Arizonans.”

CEO of the LGBTQ Victory Fund, Annise Parker, said:“An LGBTQ woman winning a U.S. Senate seat in a state that voted for Trump is a game-changer, both for the LGBTQ community and the Democratic party.

“Kyrsten’s victory makes clear that an LGBTQ candidate who listens to voters and prioritises their issues can win elected office anywhere—blue state or red state.

“It also signals to the Democratic party that nominating more LGBTQ candidates for high-level positions should be a strategic priority, because their openness and authenticity resonate with independent voters.”