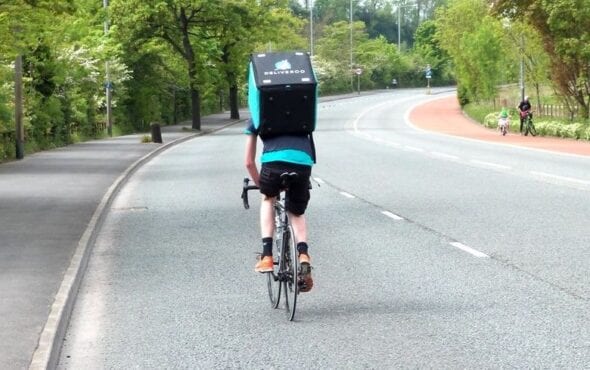 The rider shouted abuse at the couple as they walked in Croydon.

A delivery driver for Deliveroo has been suspended after he allegedly shouted homophobic abuse at a gay couple walking on Waddon New Road in Croydon last Sunday (12 July).

MyLondonNews reports that the couple, only identified as Scott, 27, and Adam, 31, were the only people on the pavement when the unidentified Deliveroo rider is said to have shouted “You’re disgusting” at them. The rider also called them “faggots” and said “your witchcraft will come back on you.”

Speaking to the outlet, Scott said: “We face this [homophobic abuse] every day. Even in London, which we can all feel is incredibly open, there is still work to be done and though it’s tiresome and it can make us weary, we have to keep pushing forward.”

He added: “We have it easier than most, being white, cisgender males so we know to use that privilege, for example to report anything that happens knowing that most likely due to our skin tone we will be listened to.

“We feel resilient, we feel strong but of course there is disappointment in the people who are hateful and ignorant.

“I wouldn’t call it a shame, it is shameful but moreover it is disgraceful and lazy. To be uneducated and ill-informed in an age of uncapped knowledge via the internet is inexcusable.”

Continuing, he spoke of the need to spread awareness of the LGBTQ+ community, so that the verbal abuse he and Adam received would be stamped out: “As members of the queer community we need to act like troubleshooters, educating ourselves and educating others and then repairing and helping where help is most needed,” he explained.

“We also need this support from our allies, potentially even more so as though it’s unfortunate, the societal norms put more credence on the voices of straight, white, cispeople right now. We need those exact people to be educating themselves and advocating for the queer and trans community.

“It has to start with us personally, acknowledging and removing our biases to then change the bigger picture.” Deliveroo has suspended the rider in question, and said that his contract will be “ended with immediate effect” if the allegations are proved.

A spokesperson for the company said: “Deliveroo takes a zero tolerance approach to any form of discrimination. The incident was dealt with urgently by our escalation team and we immediately took action to suspend the rider while an investigation is carried out.

“The rider will have their contract with Deliveroo ended with immediate effect once we have carried out the necessary due diligence to confirm the incident.”

The Metropolitan Police are investigating the incident as a hate crime, and said: “Police were called shortly after 9pm on Sunday, July 12 following an incident earlier in the evening in which two men were verbally abused on a street in Croydon.

“Officers made an appointment to speak with them, and due to the nature of the comments made, the matter was recorded as a hate crime. There are currently no active lines of inquiry unless new information or investigative opportunities arise. There have been no arrests.”