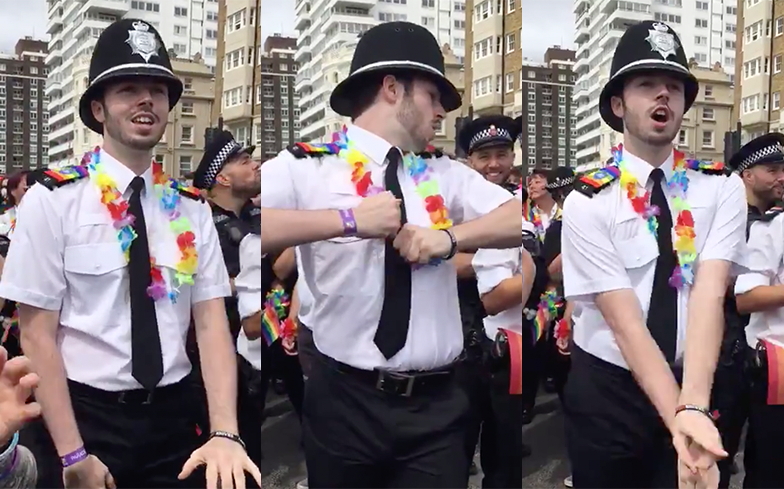 “Love this, 50 years after Stonewall, the police are not fighting us, they are dancing with us.”

A police officer has become a viral sensation after showcasing his sickening dance moves at Brighton Pride.

The LGBT+ Twitter account for the Hertfordshire Police Department posted a video of one of their officers serving full-blown choreography to Steps’ 2017 comeback single, Scared of the Dark, which has now been viewed over 25,000 times.

One Twitter user wrote, “As a UK expat living in the US, this made my day. We have had an horrendous 24-hours here but thanks to this, I am smiling again! Thank you!” while another opined that he should become Steps’ new backup dancer.

“What a mover and if Steps ever reform and tour again they should get him up on stage,” they said.

However, there were a select few who condemned the video because of his “uniformed disciplined service”, which led to one user hitting out that “all the homophobic gammons can do one. The police look after EVERYONE. Even LGBTQ people.”

Another praised the police department for being inclusive and showing their Pride, writing: “Love this, 50 years after Stonewall, the police are not fighting us, they are dancing with us.”

Kylie Minogue became the latest pop princess to headline Brighton Pride this year, where she performed some of her most iconic hits such as Can’t Get You Out Of My Head, Spinning Around, Love at First Sight and All The Lovers.

She also performed her 80s classic Especially For You, which featured a same-sex couple. Spice Girls icon Mel C also hit the stage for a rendition of the band’s pop classic, 2 Become 1, which she dedicated to the non-binary and trans communities.