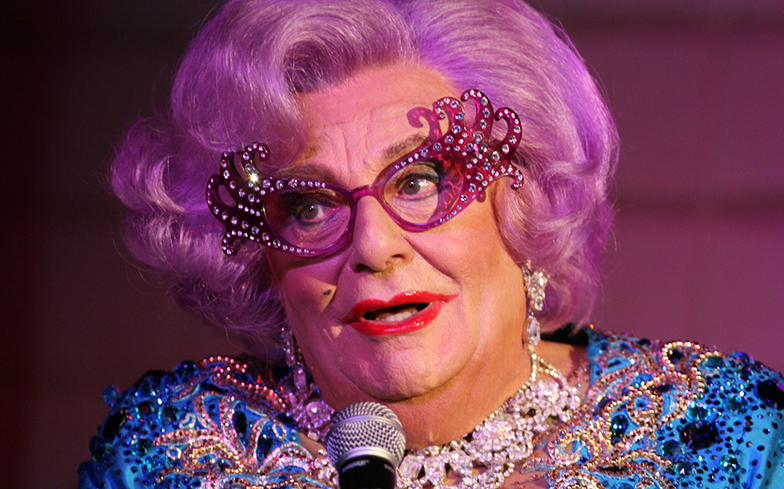 Back in 2016, in an interview with The Telegraph, Dame Edna creator, Barry Humphries, defended philosopher Germaine Greer, after she said that trans women were “men who believe that they are women and have themselves castrated.”

Defending her, he said: “I agree with Germaine! You’re a mutilated man, that’s all. Self-mutilation, what’s all this carry on? Caitlyn Jenner—what a publicity-seeking ratbag.”

In a later interview, after being informed by the interviewer that more than 40% of trans individuals have attempted or considered suicide, Barry referred to outrage from trans activists as “terrible rat-baggery” and called being trans “a fashion”.

“How many different kinds of lavatory can you have?” he questioned in the interview, addressing the debate over whether trans people should be allowed to use their preferred bathrooms (for the record; yes they should).

He added: “It’s pretty evil when it’s preached to children by crazy teachers.”

And now, in a new interview with the Sunday Times Magazine, Barry has said that his 2016 comments were “grotesquely interpreted,” although he failed to offer an alternative interpretation.

He added: “Edna carefully said she thought that men who had themselves castrated did not become women, and that got taken the wrong way.”

Elsewhere in the interview, Barry sympathised with Dutch man Emile Ratelband, who attempted to self-identify as a different age. “One can change one’s pronoun, but not one’s age,” Barry remarked.

He also shot down speculation that Dame Edna was a lesbian, saying: “As she once said, she doesn’t even like the word. It leaves a nasty taste in her mouth.”