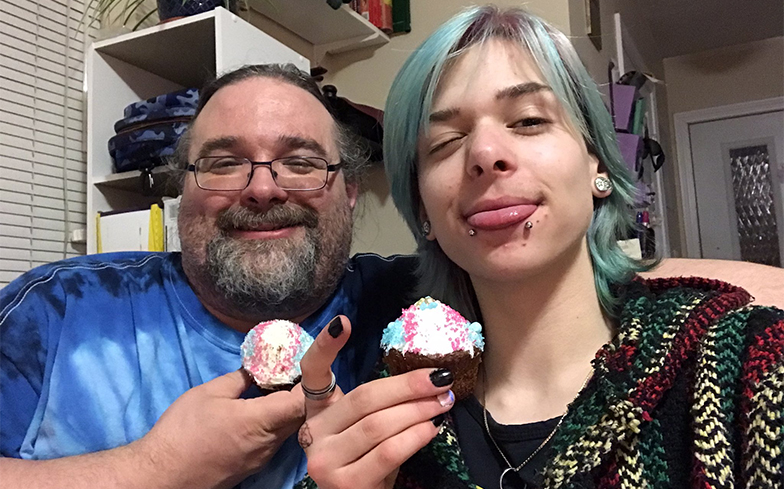 This is parenting done right.

Canadian father of two Dave Scott has gone viral on Twitter after sharing his love and support for his transgender son Jaden, even throwing a party to celebrate the one year anniversary of him starting testosterone treatment.

“So this month my 16 year old son started testosterone. Today he’s throwing a one year T-Versary,” he wrote.

“My kitchen is full of teens playing ‘beer’ pong and aching mock-tails, and we’ve got the chocolate fountain going. It’s a happy place. And I’m worn out from running errands all day.”

Throughout the night he shared cute updates to his Twitter followers who were eagerly awaiting the next part of the story, including Trans Pride cupcakes, words of affirmation and a (slightly bizarre) mixture of onion and chocolate.

And he had a message for other trans kids who may be struggling. “Lots of love to everybody out there, remember you guys are valid, no matter how you transition or what your journey entails. Stay safe everybody,” he said.

Dave’s heartwarming love and acceptance for his trans son quickly went viral, with his original tweet getting over 200,000 likes. It was an emotional thing to see for many LGBTQ people on Twitter, who praised him for his great parenting.

“This is seriously so wholesome. I absolutely love this. It makes me so happy to see parents like you showing real love,” wrote one Twitter user, while another added: “This is the kind of parenting we need to see more of in the world.”

A third person wrote: “I could only DREAM of this level of love and support from my family when I realised I was non-binary. Bless your heart.”

After being called the “best trans affirming dad”, Dave replied: “Boggles my mind how any parent could turn their back on their child. Every parent needs to make the effort to learn and educate themselves.”

It’s a shame that a parent supporting their child is seen as something out of the ordinary, but when trans people around the world continue to face discrimination and violence, sometimes even from their own families, it’s heartwarming to see.

More of this in the world, please!