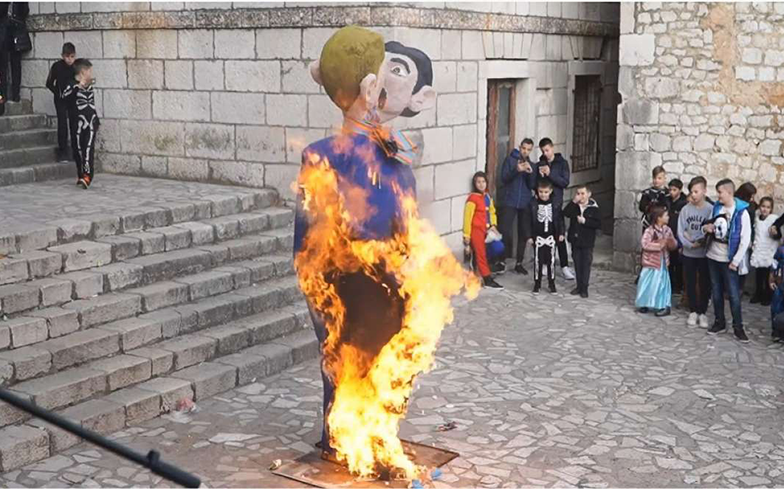 Politicians and human rights groups have condemned a Croatian town for burning an effigy of a same-sex couple and a child.

The residents of Imotski, in the Dalmatian Hinterland, cheered and danced as the image was set ablaze during a parade.

The effigy of the gay couple were wrapped in a rainbow scarf while the child bore the face of left-wing politician and Social Democratic Party MP, Nenad Stazić, who recently called for same-sex couples to be allowed to foster children.

“My head is spinning from this culture of death,” an announcer told the cheering crowd moments before they burnt the effigy to a crisp. “This year, let’s set this grotesque family with baby Nenad Stazić on fire!”

The organisers of the festival explained why they did it to the Slobodna Dalmacija newspaper, saying: “We are a conservative society, and follow tradition. Give a child to a mother, as the saying goes. We think it’s the right thing to do.”

Zoran Milanović, President of Croatia, slammed the festival for promoting hatred and violence.

“The symbolic burning of the same-sex couple with a child in Imotski is inhumane, unpleasant and totally unacceptable under the cover of the carnival celebrations,” he said in a statement on Facebook.

“Hatred for others, intolerance and inhumanity are not and will never be a Croatian tradition.”

He continued to say that he “will be monitoring the response of our public institutions, especially since [the burning] was watched by many children who witnessed the spread of hate and incitement to violence.”

Daniel Martinovic, of The Rainbow Family Association, slammed the event and asked: “What kind of message is being sent to our children, children who nowadays in Croatia grow up with lesbian mothers or gay fathers?

“Burning a gay couple, and even worse, a child, directly calls for hatred against groups that are frequently discriminated against in society. Such an act is an unacceptable incitement to hatred, discrimination and violence, and spreads the hostile environment towards both rainbow families and to children in the foster care system.”

Social Democratic Party MP Arsen Bauk said he will file a criminal complaint against the organisers.