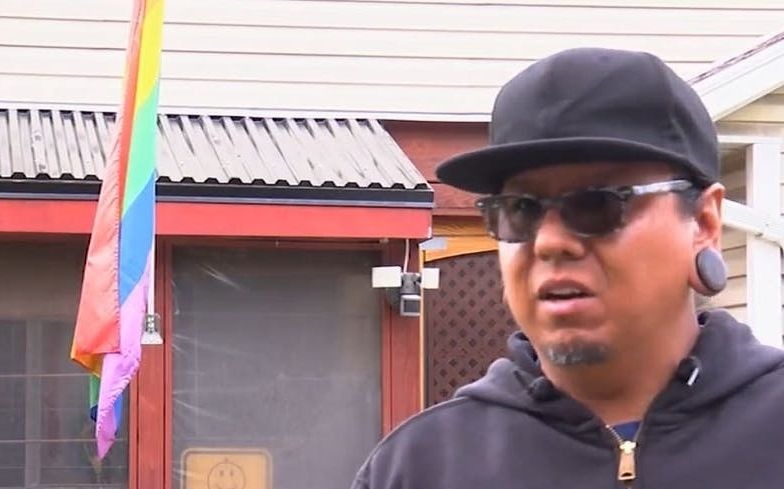 The house has the rainbow, Mexican and American Indian movement flag flying outside.

A couple in Utah, whose house was shot at while they slept, think the house may have been targeted for flying flags supporting minority communities, including the LGBTQ community.

The house flies the flags as it “helps out those in need and focuses in the LGBTQ community and the undocumented community as well.”

Xochiacatl Lopez, who owns the house in Salt Lake City with his partner, told ABC4 News that he heard the shots as he was preparing for work at 2:30 am on Wednesday (20 May). “I heard a shot,” he explained.

“The first thing that crossed my mind was it sounded too close and then I heard a bunch of them. I just rolled down to the bed, into the floor, and pulled her [Nahui] by the shoulder. I covered her with my body until the shooting stopped.”

Upon exploring the house, the couple found some bullets, with Xochiacatl saying: “We found where it went through a closet and hit a bunch of stuff, and then I had to get the cops and say, ‘Hey, the bullets, they went through the house.'”

Giving a message to the shooter, he said: “If you think you’re tough like that, feed the hungry. You know that is something tough to do. That is something that has credibility and has worth in this life.”

Police are investigating the shooting and Michael Ruff, a Salt Lake City Detective, said that Xochiacatl’s security camera might have caught footage of the shooter.

As the motive isn’t known, they aren’t investigating it as a hate crime yet, but Duff said: “We have actual rounds going as you can see in the video that you shared with me and that concerns us. Those can hurt and kill somebody very easily.”

Related: Utah man said he was “going to fix the gay” before raping lesbian