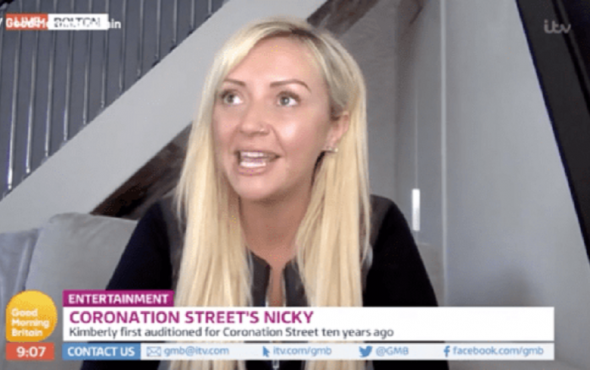 The actress made her debut on the soap last week.

Coronation Street actress Kimberly Hart-Simpson, who plays new character Nicky Wheatley, has come out as bisexual during a live television appearance on Lorraine.

During a discussion about her character, Kimberly revealed that she designs her own clothes, and had designed a rainbow red carpet look for former Hollyoaks star Jessica Ellis. “It was during Pride Month, so it was really important, we were representing the LGBTQ community and I’m part of that as well,” she said.

Kimberly then revealed her sexuality, saying: “I represent the B. So for me to do that was really, really important.

“This was the discovery of when I was starting to learn to sew, so she put a lot of trust in me to do that!”

Lorraine proceeded to praise the actress for comfortably speaking about her sexuality, saying: “I love that you’re part of the community because, you know what, that’s what we need. More visibility. It makes all the difference in the world, love, it really does.”

Elsewhere in the interview, Kimberly spoke about how it felt to finally get the call to be part of the iconic soap after auditioning for ten years. “I remember getting the job, I got the call and I was in a basement and I fell to the floor… I was crying,” she recalled.

“It’s been ten years in the making, the first day was so weird, I was quite calm. You’re around legends, but I felt quite like I belong [here].”

During her acting career, Kimberly Hart-Simpson has also appeared on shows like Mount Pleasant and Hollyoaks.

Coronation Street is known for having a wide range of LGBTQ+ characters, as well as actors, and the soap usually has its own float for Manchester Pride.

During last year’s celebrations, some homophobes attempted to disrupt the event, waving picket signs that read: “Abstain from fleshly lusts which wage war against the soul.”

However, Antony Cotton, who plays gay character Sean Tully on the soap, jumped off of the float to confront the protesters. People who observed the event say that Antony approached the protesters with a Pride flag, before using it to touch their signs. As he went back to the float, he blew a kiss in their direction.

He is also reported as telling the protesters to ‘shut up.’