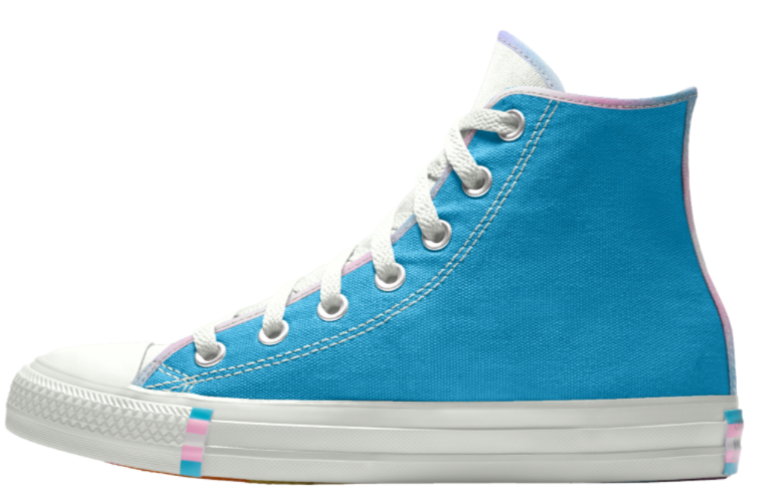 The Pride range for Converse will now feature the trans flag.

Converse has unveiled its Pride range for the upcoming Pride season, and while many of the shoe designs boasts the rainbow flag, the transgender flag is also represented.

Prices of the shoes range from $60 to $80, and the low top shoes featuring the trans flag also have “Yes to Love” emblazoned on the side of them. All shoes in the Pride range will also have a rainbow outsole.

On their website, Converse write: “March like you mean it in colourful sneakers made for celebrating the LGBTQ+ community.

“With rainbow soles and your choice of flag-inspired colours, laces and special-edition patches, it’s easy to design a pair of parade-worthy Chucks.

“However you identify, whoever you love – tell your story with Pride.”

Although the shoes advertised only show the gay and trans pride flags, due to customisation it is possible to design a number of different Pride flags.

The websites claims to have colours inspired by, among others, the intersex, genderqueer, bisexual, lesbian, asexual and pansexual flags.

A L S O they have #transPRIDE shoes! We have to stan. pic.twitter.com/CEcJEXTpgQ

#TransIsBeautiful
Thank you @Converse for making a #trans PRIDE shoe this year!
My 11 year-old-son is ECSTATIC! 🏳️‍🌈 pic.twitter.com/E6lcqIEvfA

Just a note to my trans friends: Converse currently has trans pride shoes in both adults and kids sizes and they're pretty amazing.

However, despite this positive step, Converse have yet to announce whether they will be donating profits on the shoes to LGBTQ charities or organisations.

Last year, Disney launched its first-ever Pride collection. The Rainbow Mickey Collection features tank tops, t-shirts, hats, water bottles, sunglasses, pin badges and even a fanny pack, all emblazoned with the iconic Mickey Mouse logo, which has been given a multi-coloured makeover.

Related: A truly inclusive Pride must include businesses too