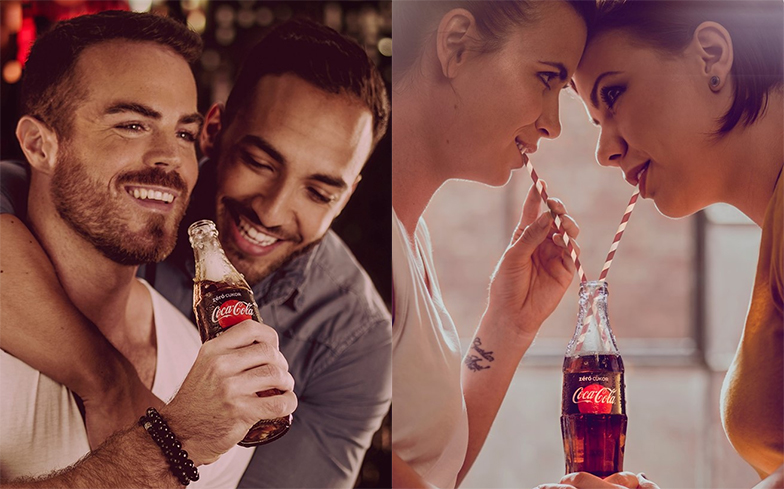 The posters, which have been put on display at train stations and bus stops in capital city Budapest, feature same-sex male and female couples alongside the #LoveIsLove hashtag and the slogan, “Zero sugar, zero prejudice”.

Coca-Cola have launched the campaign to coincide with the week-long Sziget music festival, which has taken on the theme “Love Revolution” – it’s hoped that the posters will promote LGBTQ acceptance.

While laws and attitudes towards LGBTQ people are relatively progressive in Hungary (discrimination is illegal, and 64% agree that LGBTQ people should share the same rights as straight people), not everyone is happy with Coca-Cola’s inclusive posters.

Boldog István, an MP from Hungary’s conservative right-wing party Fidesz – which has held majority power since 2010 and opposes equal rights including same-sex marriage – called on his followers to boycott Coca-Cola’s products.

“Until they remove their provocative posters from Hungary, I will not consume their products! I’m asking everyone [to do the same],” he wrote in a post on Facebook. When people called him out over his bigotry, he left a comment asking them to “respect” his opinion.

Meanwhile, an online petition calling for a boycott of Coca-Cola products and for the adverts to be banned in order to “curb a homosexual lobby aimed at children” has reached over 35,000 signatures at the time of writing.

“If Hungarian society accepts this, there will be more and more steps,” the petition claims. “Posters, commercials, films, rainbow products, etc. And as we continue to slide down the slope, it will become increasingly difficult to stop.”

Fortunately, Coca-Cola have shown no sign of backing down in the face of bigotry, and have since released a statement explaining that the pro-LGBTQ adverts running in Hungary “reflect [their] values” as a brand.

“The Coca-Cola Company strives for diversity, inclusion and equality in our business, and we support these rights in society as well,” a spokesperson said.

“As a long-standing supporter of the LGBTQI community, we believe everyone has the right to love the person they choose. The campaign currently running in Hungary reflects these values.”