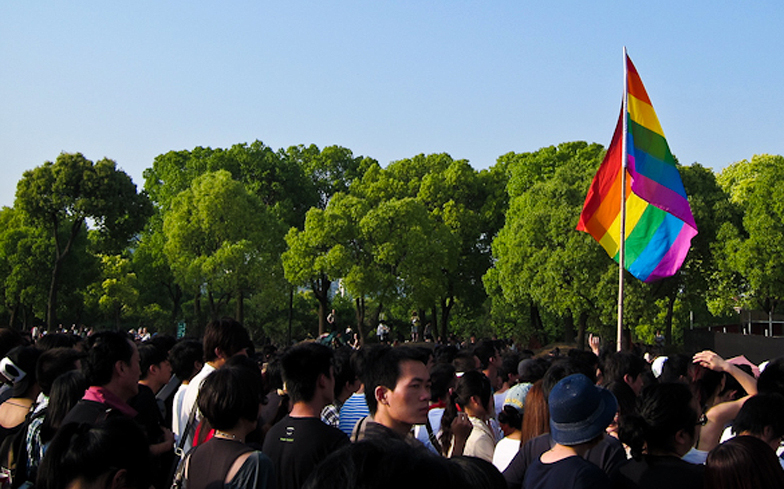 ShanghaiPRIDE announced it was “taking a break” from scheduling future events in the country.

China’s oldest Pride organisation, ShanghaiPRIDE has announced that it is cancelling all events, and taking a break from scheduling future ones. The organisation has been running since 2009.

As Pride marches are banned in China, ShanghaiPRIDE organised events like rainbow bike rides and pride runs, these went forward during the month of June. Film festivals and conferences were also held, with a Pride Month art exhibition due to run for a month, and a gala was due to be held on 1 December to commemorate World AIDS Day.

In a statement on their website, titled The End of the Rainbow, they wrote: “ShanghaiPRIDE began in 2009 as a small community event in celebration of acceptance and diversity. We hoped to instill a sense of belonging in anyone who sought it and nurture an environment of inclusion and love.

“Over the past 12 years, we worked hard to enrich the culture and diversity of this city that we love so much: we showcased inspired artwork, theater and films; we fostered connections through job fairs and group open days; we offered a platform for individuals to share authentic stories about their lives; we threw parties that brought people together; and we hosted forums to trade wisdom on how to make Shanghai a more vibrant, inclusive place.”

It added: “Pride has a lot of different meanings for different people – for us, it has always been about showing our community that not only is there nothing wrong with who we are, but that our identities and the people that we love are worth celebrating.

“ShanghaiPRIDE regrets to announce that we are cancelling all upcoming activities and taking a break from scheduling any future events. We love our community, and we are grateful for the experiences we’ve shared together. No matter what, we will always be proud – and you should be, too.” It is unclear what caused the cancellation, and ShanghaiPRIDE co-founder, Charlene Liu is quoted on Radii as saying: “This decision was difficult to make, but we have to protect the safety of all involved.

“It’s been a great 12-year ride, and we are honoured and proud to have traveled this journey of raising awareness and promoting diversity for the LGBTQ community.”

Although homosexuality is legal in China, the country has taken great steps to try and censor mentions of it within the media. The country has banned gay characters from appearing in television shows, and was banned from airing Eurovision after it cut Ireland’s performance from 2018’s Eurovision semi-finals because of two same-sex dancers.

Some social media users in China speculated that this crackdown on LGBTQ+ visibility could be the reason behind the cancellations, with one Weibo user posting: “Obviously, it’s not due to the outbreak because it didn’t stop the festival from happening in the first place. In China, when something gets attacked abruptly, we know what’s up.”

CNN reported similar feelings, with an anonymous head of an LGBTQ+ group in the country saying: “The public gets to see the visible and impactful aspects of what we do, but they can’t imagine the difficulties we face behind the scenes — I think Shanghai Pride is no exception.

“With things becoming harder and riskier, laying low may let you survive for now. But the purpose of our job is to raise visibility and educate the public — that’s the dilemma.”