Chile’s first same-sex couples get married as equality law comes into effect: “We never imagined we would experience this” 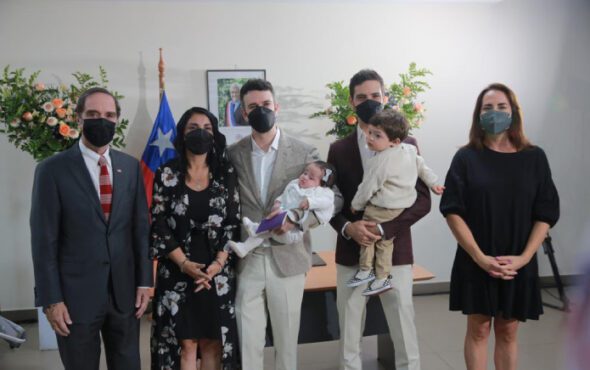 The first same-sex couples have started to get married in Chile after the country’s landmark equality law finally came into effect.

On 7 December, both Chile’s Senate and lower house of parliament voted heavily in favour of the legislation.

The law had been stalled by Congress since 2017, with same-sex couples being allowed to enter into a civil union since 2015.

It has now finally come into effect after being signed into law by current President Sebastian Piñera, much to the shock of the Catholic Church.

Javier Silva and Jaime Nazar were the first couple to get hitched on 10 March, tying the knot together in the Civil Registry of Providencia of Santiago, the capital of Chile.

They have two children together and have been together for six years, with the law finally giving them the chance to enter into marriage.

After the ceremony, Jaime said: “We never imagined we would experience this moment in Chile.”

Consuelo Morales Aros and Pabla Heuser Amaya were also among the first gay couples to say “I do” thanks to the new law.

They have wanted to get married because of the two-year-old daughter they have together.

“It was our dream that we both be her parents,” Conseulo told the BBC, explaining that her partner had gone through reciprocal in vitro fertilisation.

Despite Conseulo supplying the egg, Pabla having the embryo implanted into her and ultimately giving birth to the child meant that she was legally recognised as its biological mother – until now.

Pabla is overjoyed that their child, who they can both now be registered as the parents of, “will finally have the two mothers she deserves instead of just one”.

According to the Civil Registry Office, the words “husband” and “wife” will now be replaced with “spouse” to be more inclusive.

“President Sebastián Piñera finished by pushing very hard for the initiative,” Minister Larraín said after the couple tied the knot. “Because of this, a new page has today been written in Chile’s history: the law that enshrines same-sex marriage in our legislation has come into force. From today and henceforth, marriages will always be between two people, whoever they may be, and that is why this is a very important day.”

Undersecretary Recabarren said that the new legislation has “strengthened” the “value of marriage” and that “today equality and non-discrimination have triumphed, where families are all the same.”

“Today, we can all celebrate that we are a fairer country, that we are a country in which people’s freedom and equality is something that has really become concrete,” they continued.