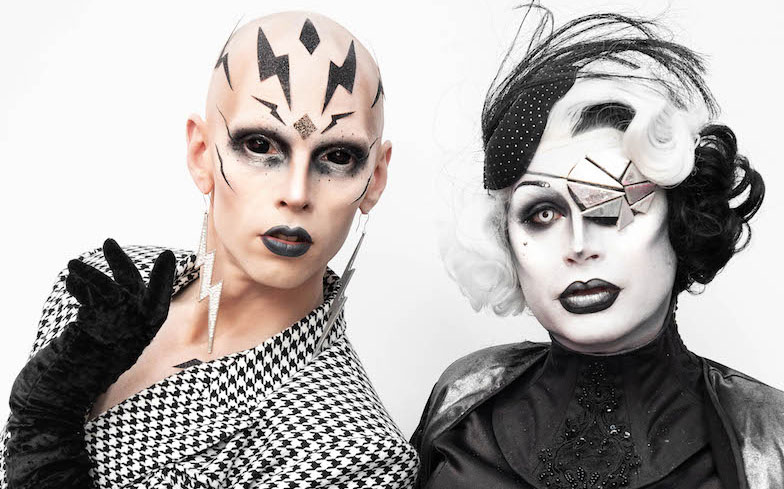 While the phenomenal success of RuPaul’s Drag Race catapults queens across the pond into the limelight, the UK queer scene has been thriving on its own merit, birthing an equally gag-worthy army of queens and kings with talent to spare.

Prime examples are Cheddar Gorgeous and Anna Phylactic, two staples of the Manchester drag scene and part of The Family Gorgeous, who are soon to star in a new Channel 4 series which sees them travel across the country giving makeovers to everyday Brits on a journey of self-discovery. Think Queer Eye, but with drag queens.

We sat down for a kiki with Cheddar and Anna at DragWorld to talk about their best tips for starting drag, the double-edged nature of Drag Race, and whether a UK version of the hit show would be a good thing for the scene…

What makes UK drag different from anywhere else around the world?

Anna: I don’t think it is massively different, is it? There’s little pockets of fabulous drag happening everywhere, and wherever we’ve travelled there have been people of a similar ilk. Although we were saying before that UK drag has a very different past, so we’re rooted quite a lot in performance, like panto, there’s a lot of different influences. But yeah, wherever we’ve been there’s little pockets of similar people form our tribe.

Cheddar: I think one of the things that interests me is that people seem to want to break drag into little groups and define it, like ‘This is what American drag is like, this is what British drag is like, this is what pageant drag is like’, instead of realising that there are people working in all kinds of different ways doing drag. People often try to make that distinction that American drag queens lip sync and British drag queens sing live, and all that sort of stuff, when actually there are artists all round the world doing very different things in different locations. So maybe we should celebrate how diverse drag is globally, rather than trying to make a distinction. There’s been a lot of talk about doing a UK version of Drag Race. Do you think this would be a good thing for the drag scene here?

Anna: There’s certainly a big enough drag scene, it’s very in vogue right now, so if it is going to happen I imagine it would be soon. I think it’d be great! It’d give people some exposure and a nice platform.

Cheddar: I think anything that gives individual artists more opportunities, and creates more opportunities for drag queens, is a good thing. But at the same time I think it’d be really great to see stuff that is grown in the UK come to a big light and actually have the same level of interest from people as Drag Race. So I think what would be great is if we have lots of different things happening, because there’s enough room for lots of stuff!

Anna: Coincidentally, we’re also doing a little Channel 4 series, so watch out for that!

Is there anything you can tell us about that?

Cheddar: We can’t confirm a title yet, can we?

Anna: What can we talk about?

Cheddar: So, Channel 4 have commissioned a six-part series going to towns across the UK looking to help people discover their inner divas. We’re going to be travelling around in a lovely big drag bus-

Anna: -a bit like Priscilla or To Wong Foo-

Sounds incredible. If there were a UK Drag Race, would you both want to be on it?

Anna: Well, we both applied to be the UK ambassador a few years ago. I didn’t win. But I don’t know. Never say never. Who knows what the future holds.

Cheddar: I think it would depend how they set it up and what’s happening around the same time. Let’s do it, yeah!

What are the struggles facing drag queens in the era of Drag Race?

Cheddar: I think that you can look at it in a way where you see the disparity between the two, where the Drag Race queens are getting the big gigs and everything, but even as a person who did drag before Drag Race became so massive, you have to acknowledge that it has played a part in making all of the scenes more recognised. So you can moan about it as much as you like, but it’s done so much for getting drag queens exposure and making people more interested in drag, and allowing people to discover their local scenes. I think it’s created a fertile ground for all kinds of different artists to grow. You can argue it’s a bad thing if you try and compare the two, but I don’t know whether this situation would even exist and we’d all be doing fabulous events like this without Drag Race. So cheers, Ru!

Anna: I think the only problem I can see is that people put a lot of pressure on themselves when starting drag, for example, to be this perfect RuPaul version of a drag queen. So they see the TV show and they think, ‘I need to be on that level straight away’. So that’s the only problem I do see. But like Cheddar said, it’s opened up so many doors and it’s given us fabulous opportunities, so we can’t really complain.

Cheddar: And the Drag Race queens are nice, too! They’re lovely when you meet them. A lot of them have come from a similar background as us, so they understand what it’s like to be working in clubs, they understand what it’s like to do gig after gig after gig. You can’t resent anyone being successful when they come from the same world as you. I think it’s great. What would your best tips be for someone wanting to start drag?

Anna: I think experimenting is important. A lot of people put too much pressure on themselves to be perfect straight away, and I think it’s about remembering that it’s part of the fun, like playing and experimenting and not thinking you have to be this perfect, beautiful goddess.

Cheddar: Yeah, go and be a mess for a while! Everyone goes, ‘I wanna do drag, but I don’t want to be rubbish’, and you’re like, ‘Well, go out and be rubbish, because actually the best part about drag is realising that all of this is fake’. All of beauty, however we put it out there in the world, is made up. So you should feel comfortable being you, looking however you look, and one of the great ways of doing that is to go out looking like some extreme thing that you’ve constructed. It isn’t about looking perfect all the time, it’s about actually allowing yourself to not be perfect… most of the time.

Do you watch Drag Race?

Anna: I do. I dip in and out, although I’m busy doing drag most of the time, to be honest!

Cheddar: I don’t really. Well, I’ve watched seasons one, two and three, and a bit of the last All Stars. That’s where I’m up to right now.

Anna: I don’t know if it was used in the show, but since the show, my favourite is Trixie and Katya’s ‘Oh, honey!’ Me and my friends say it all the time.

Cheddar: I’d say it in a Birmingham way though. [Adopts Birmingham accent] ‘Oh, hunnayyy!’ I don’t know what my favourite Drag Race catchphrase is. A lot of them sound like mating cats, don’t they? Like, ‘Yaaas!’

Anna: It’s not a catchphrase, but you use the shade noise a lot.

Cheddar: I’ve got that on my phone. [Imitates shade noise] That’s quite fun. But I think we need British ones on the go. So instead of ‘Yaaas!’ It should be [Adopts gruff voice] ‘Yerrrs!’

Anna: We did a Peaches Christ show, Hocum Pokem, and throughout the show I kind of turned into Frankie Howerd from Up Pompeii.

Cheddar: We have a great heritage of camp British comedy, so let’s go with it. We say ‘Lovely time!’ all the time, which isn’t a very good catchphrase, but it’s very good for many situations.

Anna: We’ll make it a catchphrase.