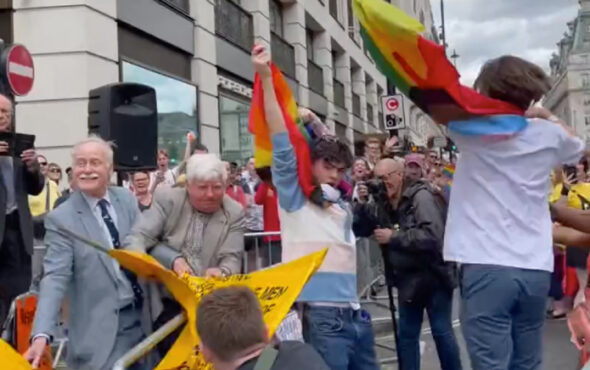 The group appeared to step in-between a Pride attendee and an anti-LGBTQ+ protester who were in the midst of a tugging match over a poster.

An uplifting video shows the group singing, twirling and frolicking with their middle fingers raised towards the protesters as Whitney Houston’s I Wanna Dance with Somebody (Who Loves Me) plays out loud, drowning out the speech of the protesters.

Kit Connor shared the clip, which has since garnered over 10 million views on Twitter, praising his fellow cast members.

“Uhhh I was videoing and screaming at them but please don’t be mistaken, it wasn’t ‘Kit Connor and the rest of the cast’, it was @joelocke03 and @SebastianCroft front and centre. Please give them the credit for doing something so powerful,” he wrote.

“It was all of us”, responded Joe Locke with a red heart emoji. “Had to do my job properly”, he joked in another tweet.

uhhh I was videoing and screaming at them but please don’t be mistaken, it wasn’t ’Kit Connor and the rest of the cast’, it was @joelocke03 and @SebastianCroft front and centre. Please give them the credit for doing something so powerful. https://t.co/SjvJFCHwKD

Fans praised the group for their actions. One Twitter user wrote in response to Locke, “Joe do u realise this video has given us all the confidence to go out and be queer unapologetically”.

Members of the cast went on to share about their Pride experiences.

“Yesterday was the most magical day! Such a joy to be celebrating pride with our community and to get to speak on stage at Trafalgar Square was ridiculous!!! Feeling all the love and all the PRIDE!!” Donovan wrote on Instagram.

Heartstopper is an eight-part British coming-of-age series based on the graphic novel of the same name by Alice Osman.

The series follows recently outed, curly-haired Charlie (Locke) as he falls for popular rugby lad and classmate Nick Nelson (Connor). Since landing on Netflix in April, Heartstopper has touched hearts and garnered praise for the representation it offers of the LGBTQ+ community.

The series has been renewed for an additional two seasons and is currently available to stream on Netflix.

The stars of Heartstopper absolutely loving it as anti-LGBT protesters are challenged by a young Pride supporter #Pride pic.twitter.com/7uUwaG9MXW