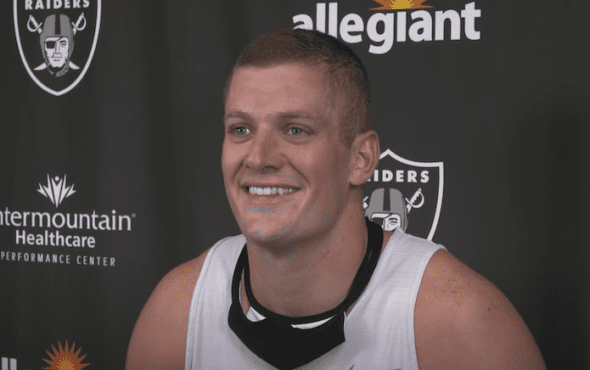 Las Vegas Raiders player Carl Nassib has opened up for the first time about life after coming out in a brand new interview.

Sitting down with ESPN, the 28-year-old discussed feeling shocked by the public’s reaction to his announcement.

“I was definitely surprised by the big reaction. It was incredible. I thought nobody would care,” he said.

“But it was such a good feeling to have all that support. I was glad to do my part to help bring visibility and representation to my community.”

However, when it came to his teammates’ reception to his sexuality, Nassib said that was the least of his worries.

“I knew it was going to be good. I had zero stress about that. Absolutely no worries about that. Great locker room. Great teammates,” he said.

“I’ve been met with nothing but love and support. It’s been incredible. Football players get a bad rep, but we’re humble, hardworking, accepting people, and this was a great example of that.”

“His locker is just a few down from mine, and I just want to make sure that he knows that, man, we just want him to play as hard as he can so we can win a Super Bowl. That’s what we’re here to do,” Carr said.

The young athlete also revealed that shortly after coming out he felt like “Jell-O” and was anxious.

Now that it has been nearly a month since publicly coming out, Nassib is ready to move forward and live life fully and authentically.

Back in June, the defensive end made LGBTQ+ history as the first active NFL player to come out as gay.

Nassib, who made the statement ahead of the 2021 NFL season (which starts 9 September), also revealed that he donated $100,000 to The Trevor Project, the leading national organisation providing crisis intervention and suicide prevention services for LGBTQ+ people.

“They’re an incredible organization, they’re the number one suicide-prevention service for LGBTQ youth in America,” said Nassib. “They’re truly doing incredible things. I’m very excited to be a part of it and help in any way that I can and I’m really pumped to see what the future holds.”

Check out the NFL star’s coming out video below.