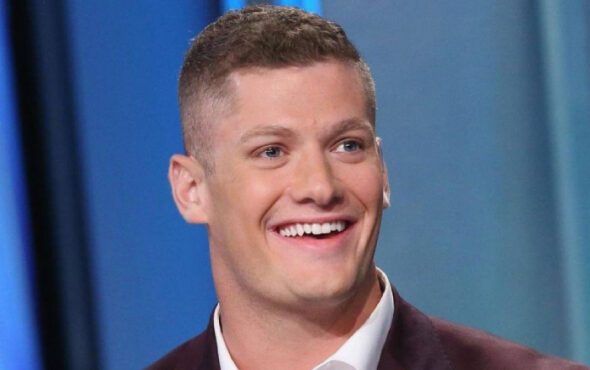 Out football player, Carl Nassib has made history again during the NFL’s Wild Card playoff game.

Last year, Nassib made headlines when he came out as gay in a heartfelt Pride Month Instagram post.

A few months later, the Las Vegas Raiders star became the first out player to earn a spot on the roster and play in a regular season.

Nassib continued to make history on 15 January, when he became the first out player to participate in an NFL playoff game.

The monumental achievement came after weeks of uncertainty due to the 28-year-old’s recent knee injury and COVID-19 isolation.

Unfortunately, after a tense game against the Cincinnati Bengals, the Raiders ended up losing with a score of 19-26.

Before the groundbreaking game, Nassib received support from NFL legend Ryan K Russell – who praised the player in an editorial piece for The Guardian.

“Counter to what some have claimed for years, Carl Nassib proves that coming out is not a distraction to a team or the game but that you can win big when your team can accept and support its players,” he wrote.

“Now not only will LGBTQ+ athletes, fans, and individuals be able to see themselves represented on Sundays when the Raiders are playing on their local channel but on a national stage in the NFL playoffs.

“Regardless of the outcome for the Raiders during wild card weekend, it’s essential to document this moment in history, one that is a first in all the years the game has been played.”

Alongside his historic season, Nassib has also made a consistent effort to give back to the LGBTQ+ community.

As part of his coming out announcement, the young athlete revealed that he donated $100,000 to The Trevor Project.

“I’m going to start by donating $100,000 to the Trevor Project. They’re an incredible organisation, they’re the number one suicide-prevention service for LGBTQ youth in America, and they’re truly doing incredible things,” he said.

His work with the impactful LGBTQ+ organisation didn’t stop there.

For the NFL’s recent My Cause My Cleats fundraiser event, Nassib created rainbow cleats in an effort to raise money for The Trevor Project.

Aside from Nassib, 2021 proved to be a monumental year for LGBTQ+ athletes.

Luke Prokop made history as the first active NHL player to come out as gay.

On the baseball front, Bryan Ruby made headlines when he became the only active pro baseballer to come out as gay.

The recent 2020 Tokyo Olympics also featured over 180 LGBTQ+ athletes – which is triple the amount from the 2016 Rio Olympics.

On top of the vast amounts of diversity and visibility, Team LGBTQ+ dominated the games by earning 32 medals – which would have placed them at seventh place.