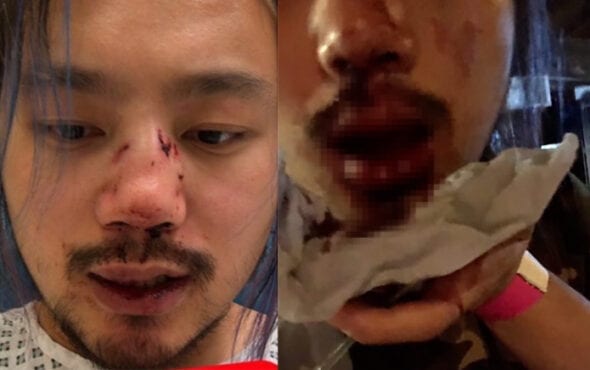 The 27-year-old was beaten close by a petrol station on Cathedral Road last Thursday (1 July).

It is reported that Mr Wu was out celebrating Pride Month with his friends before aggressively being confronted by attackers.

Speaking to Wales Online, the Cardiff University student told the publication a man approached the pair from a taxi and began yelling insults and homophobic slurs.

The incident escalated as the attacker began to throw items from the petrol station store at both Mr Wu and his friend.

“My friend was drunk,” Mr Wu told Wales Online, “so I acted quite roughly to protect him when they threw things at us”.

Mr Wu explained how another man joined the first attacker in targeting him with blows to the face and body.

The student had a tooth knocked out and was left bleeding as the two attackers left the scene from the same taxis they arrived in.

“I can’t believe things like that still happen in Cardiff. This happened just after Pride month,” Mr Wu said.

The 27-year-old is unable to identify his attackers but images of both men were captured on nearby CCTV cameras.

Iestyn Wyn, from Stonewall Cymru, revealed that almost one in four LGBTQ+ people have experienced a hate crime in the past year.

“A hate crime is any crime motivated by hostility on the grounds of race, religion, sexual orientation, disability or transgender identity,” the spokesperson added.

“Hate crime has no place in society and has always been a priority for South Wales Police.

“We encourage people, whether they are a victim or a witness of hate crime, to report it directly to South Wales Police without fear.”