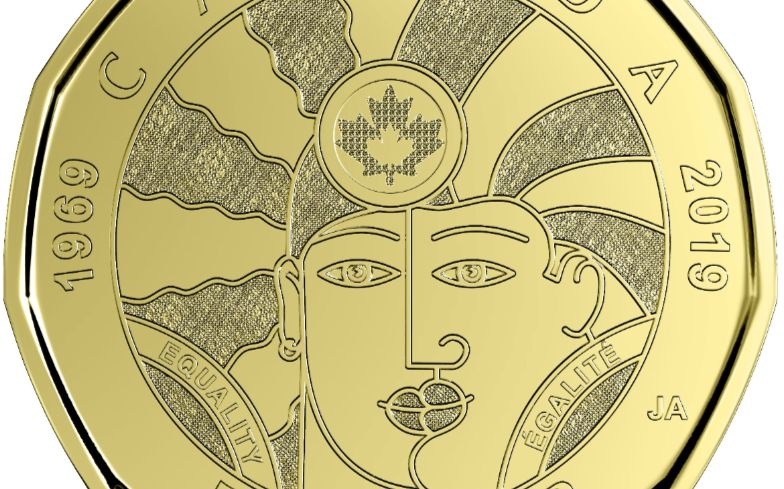 The coin was unveiled by the Royal Canadian Mint.

Canada has unveiled its special $1 coin which commemorates the 50th anniversary of the country decriminalising gay sex. The coin was entered into circulation on April 23.

The coin was unveiled by Canada’s Minster of Finance, Bill Morneau, at The 519 Center, which houses a group dedicated to advocacy for the inclusion of LGBTQ communities.

The coin, which was designed by Vancouver-based artist Joe Average, features two overlapping faces with the word equality written in both English and French.

Joe says that the two intertwined faces are supposed to represent gender fluidity and the overall gender spectrum. Joe also said that the design is left open to interpretation, with the coin either featuring two different people, or two different aspects of one person.

Randy Boissonnault, the special advisor on LGBTQ issues to the Canadian Prime Minister, said: “It is an opportunity to reflect on a landmark event in our country’s history, and a reminder of the progress still to be made as we work toward inclusion and equality for all LGBTQ2 Canadians.”

Marie Lemay, the president and CEO of the Royal Canadian Mint, said: “The Mint plays a significant role in celebrating Canada’s culture, history and values through coins.

“Marking 50 years since a landmark decision that began a process of legal reforms to recognize the rights of LGBTQ2 Canadians is a powerful way to recognize Canada’s profound belief in equality and inclusion.

“The Mint constantly strives to live these values, and our employees are proud to share the message of equality through this new commemorative circulation coin.”

However, there has been some criticism toward the coin, with CNBC reporting comments from York University historian Tom Hooper who said that although homosexuality was legalised in 1969, due to attitudes against it, equality wasn’t achieved on that date.

Some hit back at the criticism, with openly gay Liberal MP Rob Oliphant saying: “Only someone who has come of age after 1969 could possibly fail to recognize the huge significance of the decriminalization of homosexuality.

“To diminish the importance of what then-Prime Minister Pierre Elliott Trudeau did, as he changed the Criminal Code, diminishes every man, woman and transgendered person who has worked to make our world better and more inclusive.”