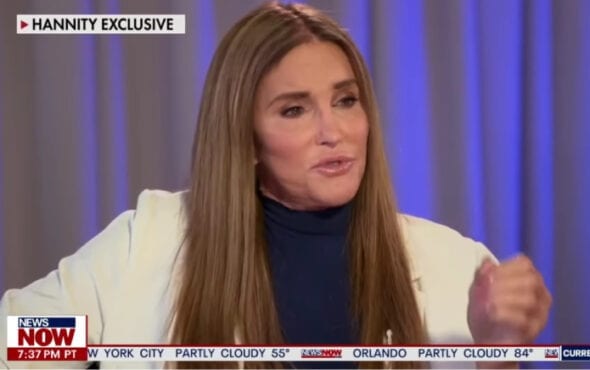 Caitlyn Jenner has doubled down on her views surrounding trans people participating in sports.

The controversial figure continued to ‘oppose biological boys’ in female sports in an interview with Fox News – her first televised interview since announcing her bid for California governor.

Jenner’s comments with TMZ came as conservative lawmakers from around the United States introduced a disturbing number of anti-trans bills, from banning trans children in sports teams and limiting their access to gender-affirming healthcare.

There are more than 234 anti-trans bills under consideration in state legislatures including the Women’s Sport Act, which would ban transgender girls from participating in female-led sports.

“I stick with my statements that I made,” Jenner told Fox News’ Sean Hannity.

“For me as a trans woman, I think role models are extremely important for young people. Trans issues, people struggle with big time. Our suicide rate is nine times higher than the general public.

“And for me to be a role model for them, to be out there, I’m running for governor for the state of California – who would have ever thunk that? We’ve never even had a woman governor.”

After Hannity pointed out that Jenner’s alliance with Republican lawmakers instead of the trans community has made people “mad”, she responded: “I move on. I want to be a role model and to be a leader.

“I think the most important thing as a leader that you can do is your compassion, your honesty, and I think that sometimes is very lacking in politics. I want to be an example to all people, not just trans people.”

“We saw how that turned out. Now she wants us to trust her?”

Make no mistake: we can’t wait to elect a #trans governor of California.

But @Caitlyn_Jenner spent years telling the #LGBTQ+ community to trust Donald Trump. We saw how that turned out. Now she wants us to trust her?

Jenner also used the interview to praise Trump and his wall, saying she liked how the television personality “came in and shook the system up”.

“A lot of people didn’t like that in Washington DC, but he came in and shook the system up. I think he did some things that I agree with, some things I didn’t agree with,” she said, before offering a muddled stance on immigration.

After telling Hannity that she’s “pro illegal immigration,” the host corrected her and said she meant to say “pro legal immigration”. Jenner replied: “Sorry, did I miss the legal part? Thanks for catching me. You’ve got my back Sean, I appreciate that.”

However, Jenner suggested that some undocumented immigrants should be allowed to stay in the US.

“I mean, some people we’re going to send back, no question about that. But I have met some of the greatest immigrants into our country.”

When Hannity referred to California’s sanctuary protections for immigrants and asked Jenner whether she would “eliminate all of the sanctuary status that currently exists in the state”, she said she would do her “absolute best”.

“I am pro-law enforcement. I am pro-border protection, okay?” she added.

In a 2019 poll, seven out of 10 Californians said they opposed Trump’s wall, while a 2018 poll found that a majority of Californians support the aforementioned state’s sanctuary laws.

Jenner is currently running for California governor against Democrat Gavin Newsom in a recall election, which is expected to be held in November 2021.

According to a report from Axios, Jenner has assembled several high profile campaign specialists to help in her fight for governor. Former Trump campaign staffers Tony Fabrizio and Steven Cheung have both been brought on to assist with her election plans.