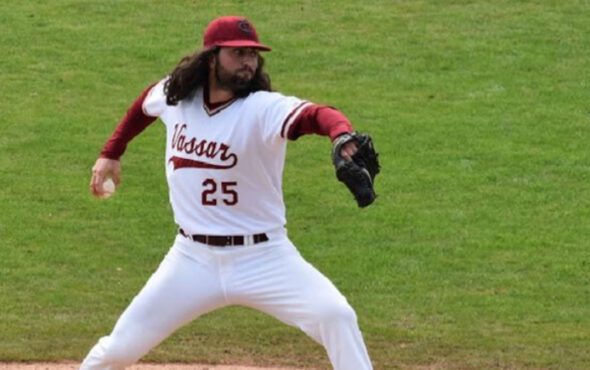 Bryan Ruby has made history by becoming the only active pro baseballer to come out as gay.

Ruby, who plays for the Salem-Keizer Volcanoes in the Mavericks Independent Baseball League, came out as gay on 2 September in an interview with USA Today.

Ruby shared that thinking of his younger self encouraged him to come out publicly, though he has reportedly been out to his friends, family and teammates for some time.

“I kept thinking about the little 14-year-old me, who was scared because I’m a baseball player who loved country music,” Ruby explained. “Those are worlds where people like me are told they can’t belong.”

The athlete, who is now 25-years-old, is hopeful that being open about his sexuality will encourage those who look up to him to become more comfortable in themselves.

He added: “I’m not a hot-shot prospect. But today, you can’t find a single active baseball player who is out publicly. I want to help create a world where future generations of baseball players don’t have to sacrifice authenticity or who they really are to play the game they love.”

With Ruby also being a country music songwriter in Nashville, he is hopeful that he can break down barriers for the LGBTQ+ community in both sport and music.

“As a country music songwriter, at first I thought being gay was a huge weakness,” Ruby explained. “There’s this genre about drinking beer and hooking up with girls in the back of the truck. Then I realised that I can bring something different to the table. Love songs don’t need to be gay or straight. And I’ve been able to write my best songs by being authentic.”

His announcement follows that of athletes Carl Nassib (NFL) and Luke Prokop (NHL), who Ruby says are “heroes” for coming out as gay earlier in the year.

Ruby said: “Each time somebody comes out in industries where queer people have not been historically represented in the mainstream, it helps to crumble the myth that you can’t be yourself. But we’re in the 2020s. It’s about damn time for this.

“If I can help just one person from this, then that’s greater than any single hit or home run or win that I ever get on the field.”