Braunwyn Windham-Burke shares first photo with girlfriend after coming out 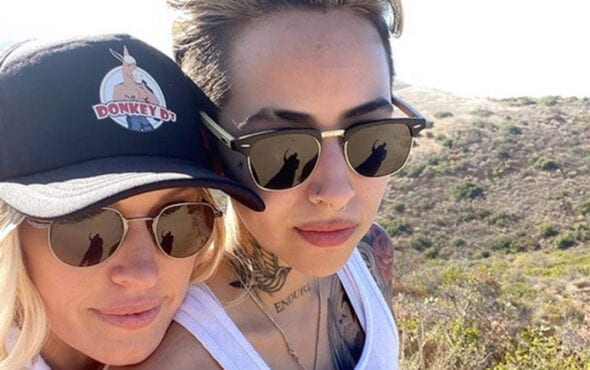 Last week, The Real Housewives of Orange County star came out as a lesbian in an interview with GLAAD, where she admitted: “I like women. I’m gay. I’m a member of the LGBTQ+ community.”

She continued: “It has taken me 42 years to say that but I am so proud of where I am right now. I’m so happy where I am.

“I’m just now starting to feel like I’m becoming the woman I’m supposed to be. I’ve always known it, but it took me, personally, 42 years to be comfortable in my own skin to say that.”

Shortly after social media welcomed her as a member of the LGBTQ+ community, Windham-Burke shared a gorgeous photo with her girlfriend Kris, who she started dating after becoming sober.

The photo shows the star as she leans on Kris’ shoulder, presumably while hiking, with a rainbow flag emoji and pink heart attached. It was posted on Windham-Burke’s Instagram story alongside positive reactions from fans to her coming out.

Despite this, she will stay married to her husband Sean Burke, who she has been with for over 20 years. They share seven children, the youngest of which is two years old. “I love Sean. I love him dearly, he is my person, he is my family,” she said. “But I’m not attracted to men and I never have been.”

The beloved personality continued to explain that she came to terms with her sexuality after sharing an on-screen kiss with her Orange County co-star Tamra Judge.

“I had a scene with Tamra that everyone kind of talked about,” she said.

“I was talking to a producer that I trust a lot, his name was James, and he said, ‘How do you feel about this? Was it a drunken mistake or is this a part of who you are?’ And I said, ‘This is who I am.”

You can watch Braunwyn Windham-Burke’s full coming out interview with GLAAD below.