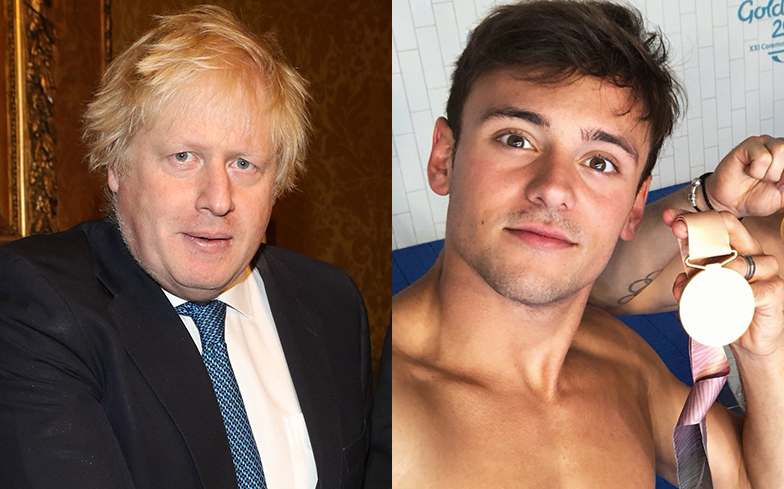 Boris Johnson has said he will broach the issue of LGBTQ rights with anti-gay countries.

The foreign secretary was responding to comments made by British diver Tom Daley, who called for countries with laws against homosexuality to rethink their views when he won gold with Dan Goodfellow at the Commonwealth Games last week.

“I feel so lucky to be able to be openly who I am without worry. I hope one day every athlete from every nation in the commonwealth will be free to compete openly as who they are too,” Tom said at the time.

37 of the 53 nations competing in the Commonwealth Games have laws against homosexuality – that’s a massive 70%.

Ahead of the Commonwealth Heads of Government Meeting, which is attended by the same countries who compete in the Games, BBC Newsbeat informed Boris about Tom’s comments.

And while he admitted that he is “not going to pretend that we are going to transform global attitudes overnight”, Boris promised he will raise the issues with countries who have anti-gay laws at the upcoming meeting.

“The UK campaigns on its values around the world in the Commonwealth – and in every forum we champion LGBT rights and we fly the flag in all our embassies,” he said.

“I had a conversation very recently with a Commonwealth country about this issue. I won’t say which one, and I made the case which I believe in absolutely passionately.

“If you allow people to live their lives as they choose and to express their love in the way they want, then you will find that you achieve far greater economic success as a result.”

Earlier this week, Prime Minister Theresa May expressed “deep regret” over archaic anti-LGBTQ laws that were introduced to Commonwealth countries under British rule.