Bob and Peppermint explain the importance of saying #BlackLivesMatter 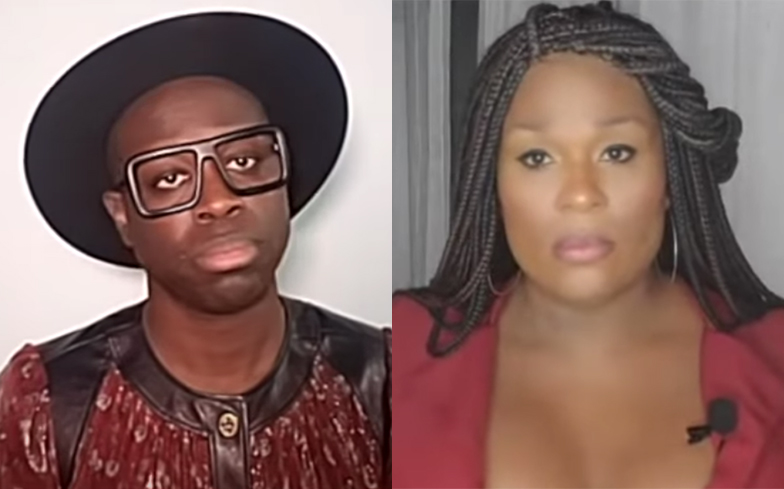 Bob the Drag Queen and Peppermint have explained the importance of voicing support for Black people.

The stars uploaded a discussion about racism onto YouTube in the wake of the murder of George Floyd, a 46-year-old Black man who was killed after a white police officer placed his knee on his neck for over eight minutes.

Protests and demonstrations have since erupted in 140 cities across the United States – and the world – against police brutality, racism and white supremacy. As of 1 June 2020, over 4000 people have been arrested.

George’s murder has also caused a resurgence in the hashtag Black Lives Matter, which aims to unite the Black community and its allies whilst campaigning against anti-Black violence and systemic racism.

However, there has been deafening silence from a large majority of celebrities and social media users. Peppermint addressed this on Twitter, saying the lack of public acknowledgement for the cause “bothers me”.

In the comments, Peppermint’s followers told her that it’s “not fair” for her “to bully and contribute to cancel culture” and that she should allow “people who can’t speak out on this the right to not speak out.”

She told Bob: “I agree with all of that. But I would not consider that tweet – which is the only time I’ve publicly spoken about this – bullying.”

Bob, who tweeted the “time has passed” for people to not be political, said he had conversations with fellow Drag Race stars who were concerned with being “cancelled” over social media if they posted ‘Black Lives Matter.’

“I ended up talking to several popular Drag Race girls about why it is important for you to say ‘Black Lives Matter’ and why we don’t have time for you to evolve, find your voice, write a poem and do a photoshoot,” he said.

“Bitch, just say it. One of these girls said ‘I’m so sick of getting cancelled’ and I said, ‘You’re not cancelled. You know who’s cancelled? George Floyd is cancelled. He is cancelled and he’s never un-cancelled. That’s what ‘cancelled’ is.'”

Peppermint added: “We cannot centre the feelings and the emotions and give preferential treatment to obvious and self-admitted ignorance and complacency. It’s human to not be aware, and that’s okay. You can educate yourself.

“It’s human to be afraid of what the reaction is gonna be, and maybe deciding not to engage. That’s okay, and that’s your right. But that’s like saying, ‘Hey, we would like everyone to pay taxes but just in case you’re worried about paying taxes – you don’t have to. So if you don’t want to, don’t even think about it.’ We can’t make that the main issue.

“How you feel, being scared about saying ‘Black Lives Matter’ or being afraid to use your voice in a way that’s political because it goes against the brand, what it does is highlights that you can thrive, live, make money and never have to talk about people being killed… it’s privilege.

“It’s privilege to be able to exist in a world where people are getting killed off camera – somebody is being shot right now. In a world where we can agree everyday if not every week, a horrible, tragic, senseless death is being committed, and you can just say, ‘How do I look? Buy my new lipstick.’

“What world is that? Because listen, I cannot tell you how many times I’ve watched similar situations and some of those same people instantly engage when it comes to other issues that do affect them.

“All I’m asking is: can you help us? Living in that world where you can just not engage and still interact with the culture, in a way that you’re picking and choosing, it shows a sense of callous.”

Bob and Peppermint also highlighted the difference in Donald Trump’s tweets in regards to protestors in Iran and protestors in the United States.

Earlier this year, Trump said he was “inspired” by the protests in Iran, which came to fruition after Iran’s Revolutionary Guard accidentally shot down a Ukrainian plane, killing 176 people on board.

He also asked the leaders of Iran to “NOT KILL YOUR PROTESTERS” and to “Stop the killing of your great Iranian people!”

Trump’s response to the George Floyd protests? He called all protestors “THUGS” and threatened violence, tweeting: “Any difficulty and we will assume control but, when the looting starts, the shooting starts.”

For ways you can help, visit this link.