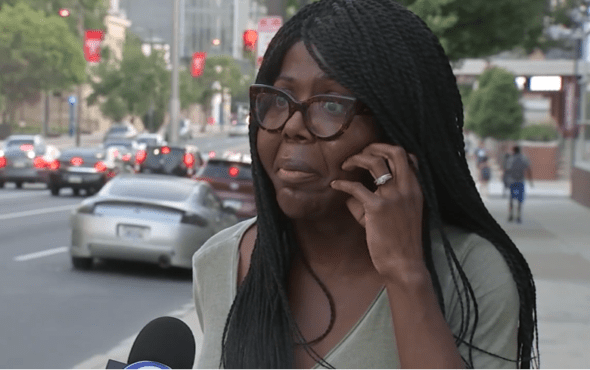 Kendall Stephens was attacked after asking a group outside her home to ‘quiet down’.

Kendall Stephens, a Black 34-year-old trans woman, was beaten by a mob inside her home after she asked them to ‘quieten down’. Kendall had been in her home, on Monday (24 August) with her husband, 12-year-old goddaughter and another child when a fight broke out outside.

She went to ask the group to ‘quiet down’ and threatened to call the police if they didn’t, but they turned on and attacked her. The attack was caught on a surveillance camera outside her house, which torn out during the attack.

Speaking to ABC 7 News about the attack, she said: “It was a brawl, people were fighting, people were throwing around liquor bottles all in front of my property while I had kids inside.

“This lady comes balling at me like a bull and starts swinging at me, I tried to close my door, front door, and as I’m doing this, she kicks it open and starts attacking me all about the face.”

She added: “They called me a tranny, they said, ‘You’re a man, we’re gonna get you.’ And they were repeating this all throughout the beating, said that I deserved it.”

The Philadelphia Inquirer reports that a female attacker grabbed a wooden planter in Kendall’s home, and beat her with it, as well as pulling out some of her hair. Kendall was able to escape to the basement, where she locked the door; her attackers left soon afterwards.

Describing her injuries, Kendall said: “My lips are swollen, my jaw is very sore, barely even able to chew it’s so bad.” She was treated at the Jefferson’s Health Methodist Hospital for a broken nose, cuts to her gums, mouth and lips, and facial swelling.

She also spoke of the psychological scars she was left with, explaining: “I am in fear of my life, they threatened to come back and finish the job. [Those were the] last words they said to me. They already showed what kind of monsters they are, they’re savages.”

Police were initially investigating the attack as an assault, but while Kendall was treated at the hospital, staff called for detectives to become involved. Police say that they have substantial leads for the attack from the surveillance footage camera.

Deja Alvarez, from the Philadelphia LGBTQ Police Liason committee, said: “I was grateful that Kendall was alive, but I am angry at some that this happened. I am also angry at some of the ways it was handled. There will be an example made that it is not going to be open season on trans people.”

Earlier this year, Dominique ‘Rem’mie’ Fells was murdered in Philadelphia, her dismembered body was found by a river on 9 June.

Police report there was trauma to her face and head, with her legs being severed off at her mid-thigh.

A friend of Dominique’s, Madelyn Morrison, said that she loved fashion, music, people and “having fun and being vibrant.” The friend added that Dominique made outfits and wigs for people, as freelance fashion work and that she organised the Rock the Runway: A Trans Empowerment Fashion Show at the William Way LGBT Community Center last year.

In a statement, Philadelphia’s Office of LGBT Affairs said: “The pain of such a loss is always difficult, but it is especially deep as we are in the midst of Pride Month—a season typically filled with joy and celebration for many in our community.

“As thousands take to the streets to proclaim that Black Lives Matter, it is critical we remember that this includes Black trans lives. Dominique Rem’mie Fells’s life mattered.”

Police have identified Akhenaton Jones as a suspect for her murder, and an arrest warrant has been issued.

Related: Trans influencers savagely beaten by homophobes as onlookers did nothing