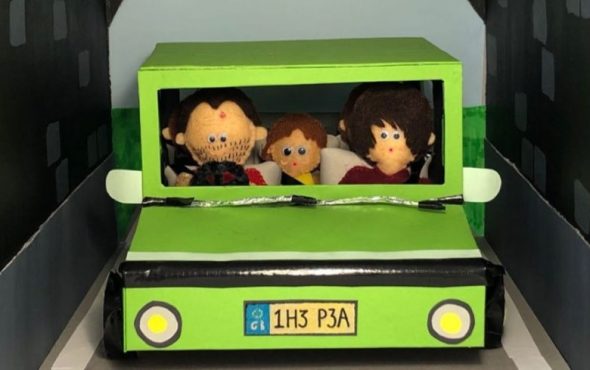 As part of her final year studies, Loughborough University student Amy Begent created an adorable stop-motion animation, titled Spud, about her father’s support of her bisexuality.

The animation’s title comes from a nickname that Amy’s father gave her when she was younger.

Amy’s initial plan was to create a project about her identity, finding pride within it and coming out. However, she realised that a lot of her self-acceptance came from the support that she had gotten from her father.

The animation shows key parts of Amy and her father’s relationship, like his support for her during an eating disorder, him being her inspiration to go into art and how she came out to him by putting a rainbow note in his wardrobe.

Explaining the work, Amy wrote: “Upon recent self-reflection, I have learnt that my own sexuality is not confined to direct acts relating to it, but rather I feel it involves my whole lived experience.

“Since reaching this conclusion my work has become an exploration of the past in which my relationship with my dad is significant. I extract key moments, from the personal memory of ‘coming out’ to him, to the more relatable memories of bike rides and picnics.”

She adds: “It is an ode to self-acceptance and an ode to my Dad in aiding that process.”

Speaking to Loughborough University about the project, she said: “Sharing something so personal is really scary and it’s like coming out all over again. It’s scary but it’s liberating.

“I would say to people that are thinking about coming out or are scared to that it is very important to do it when you’re ready and it’s something to be very proud about.”

You can watch Amy’s animation either here or below.

Related: High school student gets standing ovation after coming out as bisexual in powerful speech