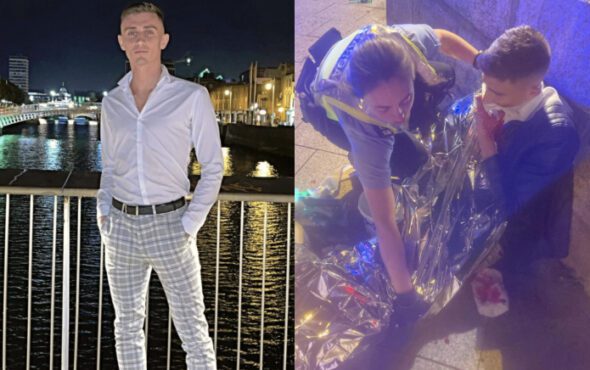 Bisexual Olympic trailblazer Jack Woolley was brutally assaulted during a night out in Dublin, Ireland.

The horrific incident took place on Friday (13 August) after the 22-year-old athlete went out to dinner and drinks with friends.

Woolley took to Instagram on Saturday (14 August) to give more insight into the attack and share graphic photos of his injuries.

“Last night (13 August) I went for a meal with my friend. Followed by a bar for a couple of drinks,” he said. “Heading back along the River Liffey a gang of roughly 8–12 men and women in their 20s began violently attacking people on the boardwalk.

“Unfortunately I was victim to these random attacks as I just walking by I was punched in the face by one of these group members. Only one punch and followed by “my mistake wrong person” then they continued to run off down the road attacking more civilians minding their business.”

Woolley went on to say that shortly after the attack he phoned an ambulance while his friends helped him through the traumatic incident.

He also revealed that his injuries resulted in him getting mouth surgery.

“Thank you all again for the support and kind messages. I hope for a speedy recovery. it’s been a tough couple of months,” he said.

Alongside Woolley’s statement, the police force, Gardaí, also gave a statement regarding the attack to Irish Independent.

“One man, aged in his 20s, was conveyed to St Jame’s Hospital for treatment of non-life-threatening injuries sustained during the incident,” Gardaí said. “No arrests have been made. Investigations are ongoing.”

Taking to his Instagram stories on Sunday (15 August), the Olympic athlete revealed that he left the hospital and was safe.

“Right so I’m home, I’m well, apologies if you can’t understand me the swelling is a little bit worse than it was before,” he began. “Don’t worry about me it’ll be alright… I’m not looking for people’s sympathy that’s not why I post or anything.

“There are thousands and thousands of message requests that I’m not able to get to right now… It all doesn’t go unnoticed. I just wanted to say thank you to everyone.”

Woolley made headlines earlier this year when he became Ireland’s first Olympic representative in the taekwondo event.

He made it to the first round of the 58k division at the 2020 Tokyo games before being eliminated.

We wish the young athlete a speedy recovery.