Why the ‘World Cup of Gay Rugby,’ the Bingham Cup, is more vital than ever 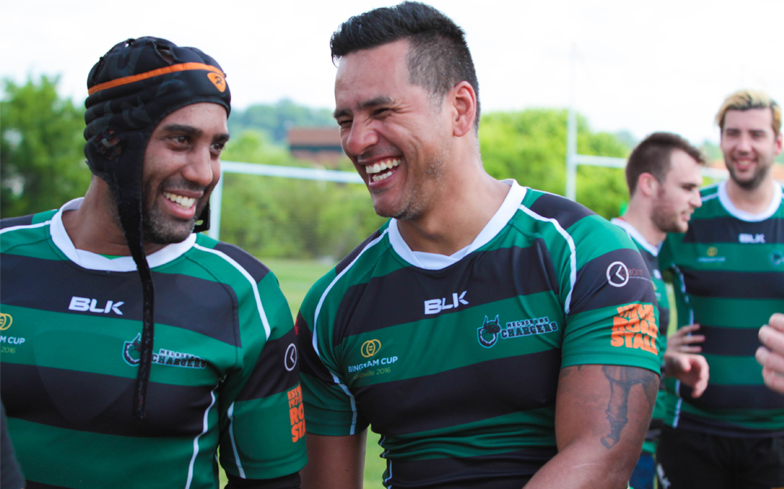 As my first season back playing rugby comes to an end, it has become ever more apparent that – since leaving the sport four years ago to compete for my country in bobsleigh – homophobia is still rampant at all levels of sport.

This year alone, my teammates and myself have fielded homophobic abuse from the opposition, several professional players have been punished for on-field indiscretions, and Israel Folau, a prominent international player for Australia, has publicly hidden behind his religion to justify his continued discriminatory posts online, with no repercussions.

Yet, I’m still asked why I insisted on being so public about my sexuality, why I see the value of inclusive sports teams, and why I look forward to flying out this weekend to Amsterdam to compete in the ‘World Cup of Gay Rugby,’ the Bingham Cup.

For those who don’t know, the Bingham Cup is the biennial rugby tournament for gay and inclusive rugby teams from all over the world. It is named after Mark Bingham, who was a passenger aboard the ill-fated United Airlines flight 93. This year the tournament is fielding 1,700 players from 72 teams. Image: Simon Dunn kisses his boyfriend on the rugby pitch

Based on phone calls from United 93, Bingham is known to have been one of the passengers who helped form and carry out the plan to retake the plane from the hijackers. He ultimately led the effort that resulted in the crashing of the plane into a field near Shanksville, Pennsylvania, which ultimately caused all of the passengers’ deaths. Inevitably preventing the hijackers from reaching their intended destination – believed to be the White House – and saving countless lives, Bingham is survived by his parents, stepmother, and his former partner of six years, Paul Holm.

Bingham was also a member of and fundamental in the creation of the San Francisco Fog Rugby Club. He was also integral in the forming of Gotham Knights Rugby Football Club (New York). San Francisco Fog is one of the original clubs in world to be classified as an “inclusive team,” meaning all players are welcome regardless of their sexuality, gender, race, or HIV status. It, and teams like it, give a place to segments of our society who are generally underrepresented in the sporting fraternity.

In an email to the San Francisco Fog team shortly after their acceptance into their local union, Mark wrote: “We have the chance to be role models for other gay folks who wanted to play sports, but never felt good enough or strong enough. More importantly, we have the chance to show the other teams in the league that we are as good as they are. Good rugby players. Good partiers. Good sports. Good men.” Following Bingham’s tragic death on September 11, 2001, San Francisco Fog set up a biennial tournament for inclusive teams from throughout the world called the Bingham Cup. At the time of Mark Bingham’s tragic death, only six gay and inclusive rugby clubs existed worldwide. Today there are a total of 74 officially registered clubs that fall under this banner and are part of IGR (International Gay Rugby Association and Board). There are dozens more associates clubs, bringing the combined total to nearly 100 clubs worldwide.

Events like these are fundamental in showcasing gay and bi men as competitive and capable athletes, especially whilst homophobia is so entwined into the sporting culture and society that has led many to believe otherwise. This has become ever more apparent with the Australian Rugby Union’s lack of action on the topic, notably Israel Folau posting on social media several times that homosexuals will be going to hell.

ARU’s inaction in itself shows me we still have many more years of hard work to change this perception. Where’s if this had been any other minority, gender, race, religion realistically this would’ve been career ending.

If playing for an inclusive sports team gives gay men the opportunity to feel comfortable and welcome in the sporting world that is the first step. I, personally, was one of those men who left sport because I never felt welcome, and now sport has become my life.

Mark’s legacy has inspired me so much that I will always champion the need for such teams and such events. Until I can comfortably say homophobia in sport is all but a distant memory, I will continue to do so.

The Bingham Cup will this year take place in Amsterdam over the weekend 8-10 June.