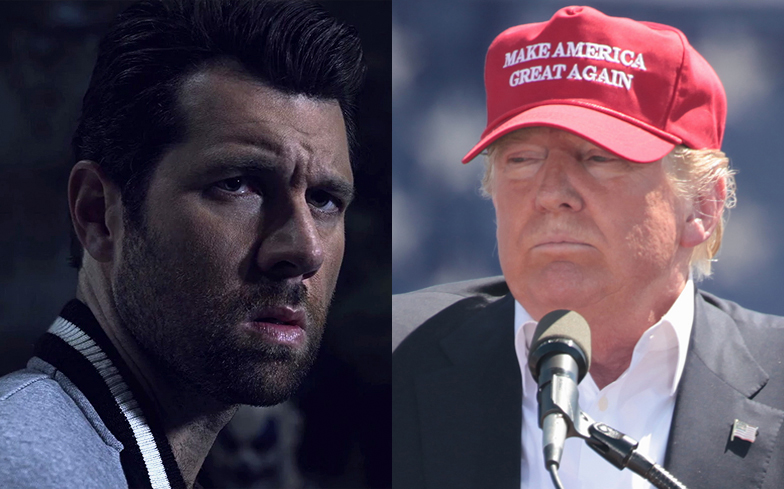 This week we have all been treated to a very different Billy on the Street.

Instead of host Billy Eichner running up to unsuspecting members of the public to ask them questions, the actor himself was cornered by TMZ after getting of a flight from Detroit.

However, although the roles were reversed, Billy didn’t hold back when he was asked about the impending mid-term elections in the United States.

“Everyone needs to vote for Democrats,” he said to the roving pap, who followed him out of the airport.

Billy was then asked about the leaked memo from the Trump administration over the weekend, which proposed to define sex as either male or female, unchangeable, and determined by an individual’s genitals at birth.

It would effectively be a move to erase trans and non-binary people from any official recognition.

“He’s not redefining shit. You can’t redefine it – it’s a fact of life,” Billy said, reacting to the memo. “He’s a fucking piece of shit, asshole, evil piece of shit. The whole administration is awful. Everyone needs to vote. You can vote now in many states – you can vote early.”

Asked if he thinks “a blue wave” will happen – meaning Democrats will take more places in the House of Representatives and the Senate over the Republicans following the mid-term election – Billy replied: “A blue wave should happen. If enough people vote, there will be a blue wave.”

Now that’s how you master a TMZ ambush, people.

Meanwhile, Billy Eichner recently launched a new series of Billy On The Street, kicking off the new series with a dash around New York City with Emma Stone.

The actor also made a guest appearance on the current series of American Horror Story: Apocalypse, and with his character still at large in the bunker, we could be seeing more of him soon.