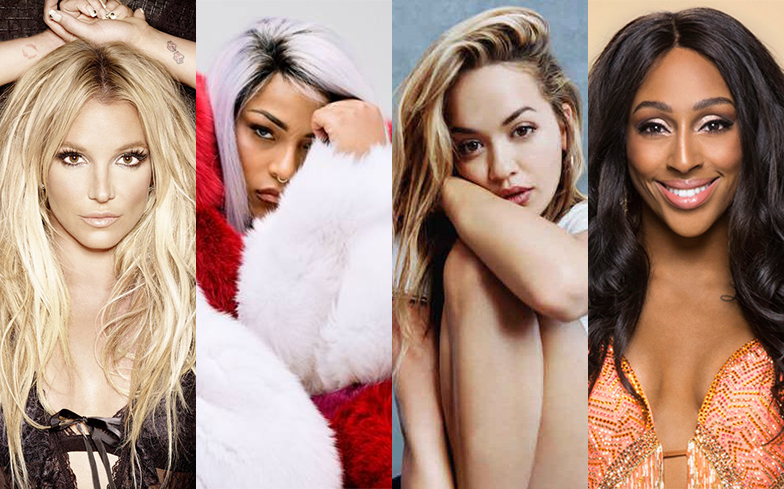 Pop music fans are in for a treat this Pride season.

While we know Pride is first and foremost a place to fight for our rights, celebrate our equality, and be around other people just like us, there’s no denying that us LGBTQ people love a good party to forget our worries – and a great pop star even more so.

Check out some of the biggest names performing at Pride events this year, and where to catch them…

While Pride event’s around the world are stepping their game up when it comes to bagging big-name headline acts, there’s no denying that Britney Spears’ recently announced appearance at Brighton Pride is the most impressive the UK has ever seen. The pop icon will be bringing her record-breaking greatest hits show Piece Of Me to the (hopefully) sunny seaside town in August, and you can guarantee we’ll be first in line.

Where: Brighton Pride on Saturday 4 August Another massive name to look out for this Pride season is Rita Ora. With a string of top ten (and often chart-topping) singles including I Will Never Let You Down, Poison, Your Song, How We Do (Party) and latest release Anywhere, she’ll certainly bring your inner diva out when she headlines Manchester Pride later this year. You’ll probably best know Jake Shears as the frontman of the fantastically queer band the Scissor Sisters, who took the UK charts by storm through the 00s with their unique brand of cheeky, camp pop music. Now, as his solo career gets under way, Jake is performing two Pride shows in Birmingham and Manchester, and we’re sure they’ll be full of outrageous moments (and hopefully a couple of old classics). You might not be acquainted with MNEK yet, but you’ll certainly know his work. His writing and production credits include Madonna (Living For Love, Hold Tight), Beyoncé (Hold Up), Kylie Minogue (Feels So Good), Dua Lipa (IDGAF), and Little Mix (Touch) among others – basically all our favourite divas. Meanwhile, his own new single Tongue is one of the most-played tracks in the Gay Times office this year, so it’s fair to say we’re more than a bit excited for his Birmingham and Brighton shows. We described her as the “pop princess ready to rule your playlists” when we featured her in Gay Times magazine back in January, and we’re even more obsessed with Kim Petras’ unashamedly bubblegum music now. I Don’t Want It At All is perfect for getting glammed up ahead of your Birmingham Pride celebrations, while Heart To Break will have you making all the wrong decisions with that boy (or girl) you just met at the club. Let’s be real: Go To Work was an under-appreciated bop. (We’re also huge fans of Insatiable, but we’ll let that one lie for now.) So why not take the opportunity to see former Girls Aloud member Nadine Coyle in all her glory at Birmingham Pride or Manchester Pride this year, where she’ll perform songs from her brilliant new EP, Nadine, and hopefully a sprinkling of Girls Aloud classics, too. We’re keeping our fingers crossed for Biology. X Factor winner and LGBTQ ally Alexandra Burke has blessed us with numerous top ten singles including Bad Boys, Elephant, Start Without You, and our personal favourite Broken Heels (because we’ve had plenty of those). While she’s recently focused on other endeavours like Strictly Come Dancing and various roles on the West End, we’ll be glad to see her back on the pop stage at Newcastle Pride and Manchester Pride, singing all the bangers for her loyal gays. She’s one of the most successful queens to come out of RuPaul’s Drag Race, and she’s only getting better. Fresh off the success of her Celebrity Big Brother win, Courtney Act will be taking to the stage at Birmingham Pride where she’ll no doubt perform some of her own singles, including Body Parts and Kaleidoscope. BFF Andrew Brady is also scheduled to present on the Main Stage, so we’re keeping our fingers crossed for some Courtdrew action.

Where: Birmingham Pride on Sunday 27 May She may be one of the freshest faces on the Pride circuit this year, but make no mistake, Stefflon Don is absolutely one to get excited about. Her single Hurtin’ Me was one of last summer’s biggest anthems, and with new features on massive tracks from Halsey and Ne-Yo, there’s plenty to look forward to from her set at Birmingham Pride this year. Fun fact: Stefflon is actually a Birmingham native, so this should be an extra special show. She may have recently hit a little bump in the road on her trip to becoming a proper LGBTQ icon, but X Factor star Louisa is returning to Birmingham Pride this year where she’ll no doubt make up for her past comments by delivering a set of solid pop bangers including Best Behaviour, So Good and recent single Yes. Best known as the lead singer of indie-rock band Gossip, the self-described “fat feminist lesbian from Arkansas” crossed over into the mainstream and became a fully-fledged gay icon when the group released Standing In The Way Of Control, a firm middle finger to anti-gay politicians who were blocking same-sex marriage from being legalised across the United States.