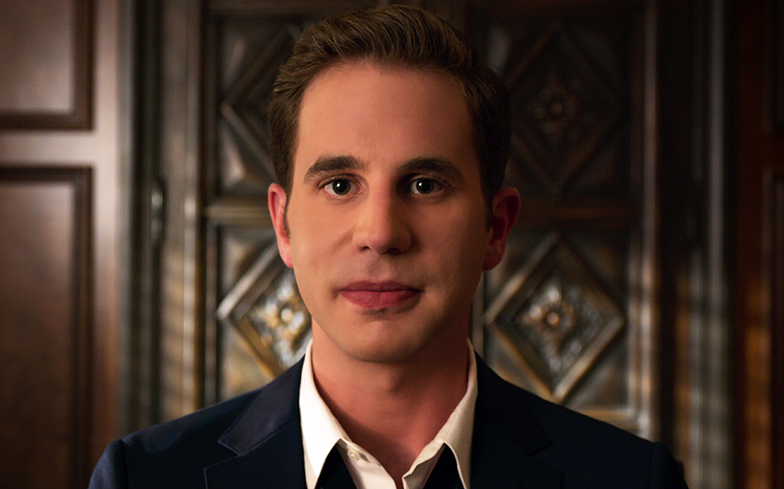 The actor was receiving an Inspiration Award from GLSEN.

The Politician and Pitch Perfect star Ben Platt has given an inspirational message to queer youths as part of an acceptance speech. Yesterday (22 May), the actor was awarded the Inspiration Award from GLSEN for his work on the Respect Everywhere initiative.

The initiative was launched by GLSEN to support LGBTQ students, and came about after the current coronavirus pandemic led to the cancellation of GSLEN’s main fundraising event. The fundraising event came in the form of short videos from 18 May to 22 May, and raised $600,000.

Platt, was given the award by his Politician co-star, Judith Light, who will be playing his political opponent in the upcoming second season of the series, and he accepted the award via video from his back garden.

In her speech, Judith praised Ben for writing songs and creating videos of positive same-sex relationships and shares hopes that one day there will be a “plethora of songs that celebrated love between people of all sexual orientations, gender identities and expressions” but acknowledges that we aren’t there just yet.

In his acceptance speech, Ben said: “To any young people who are watching, you know I’ve tried to spend the few years so far that I’ve had in my career making art that is queer and that speaks to queer people because that’s my experience and I don’t want it to be exclusive and I don’t want to make it so that people who aren’t queer can’t find themselves in the work, but I never want to change the specificity of it to, to lose any of the queerness.

“So whenever I write music, I write it about the men that I have been in relationships with, I use the right pronouns, I write about my specific story. I love to play character whose sexuality is all over the map.

“I just, I think we’re getting to a place where sexuality gets to be part of the interest and part of the tapestry and doesn’t have to be the headline and the announcement and certainly doesn’t need to be a source of intolerance, which I know still runs rampant.”

Addressing queer students, he added: “So for anyone that’s dealing with that particularly now since you’re all, I think in school online and it’s probably a lot easier for people to get to you with a screen where they don’t have to face you face to face and they can hide behind that sort of avatar and say things that are hurtful and make you feel less than.

“I would say to you, I hope that anything I’ve made, or the music that I’ve made, or characters that I’ve played have spoken to you and that you’ve connected to them and and just know that I’m on your side and I’m with you and you know your queerness is part of what makes you an interesting, intelligent, nuanced person, and I think you should celebrate it and rejoice and know that if there are people around you that can’t embrace that right now or that don’t understand that that only makes you a better person right now, it can only get better as you get older and meet people who will appreciate every aspect of who you are, including your queerness or your gayness, in my case.”

He finished by saying: “I will continue to try and do right by all of you, particularly the young queer people who are leading the way and I’m following your lead.”

You can watch the speech below or by following this link.

Related: Ryan Murphy wants to “do over” Glee with Lea Michele, Ben Platt and Beanie Feldstein